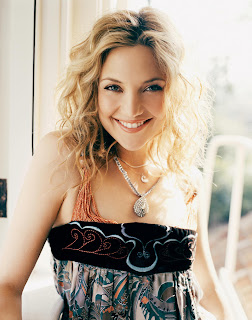 Today's eye candy is Kate Hudson, courtesy of the SalukiOrphan.

Not a bad call.

I'm trying to get some things done in the office and in the classroom right now, so today's Dosage will be brief and hopefully painless.

Bulls win, Rose shows flashes. Rookie point guard Derrick Rose scored 11 points and dished 9 dimes (assists for those of you who aren't up with the lingo) in his NBA regular season debut as the Chicago Bulls defeated the Milwaukee Bucks 108-95.

Rose had plenty of help from his friends as five other Bulls scored in double figures including Drew Gooden, Tyrus Thomas, Luol Deng, Kirk Hinrich and Ben Gordon.

The biggest surprise might have been moving Hinrich, who was recently named one of the team's captains, to the bench. The move will not only give size to the backcourt (with Thabo Sefolosha starting) it will also it gives the Bulls two starting guards in its second unit with Hinrich and Gordon.

It's only one game, but if the Bulls can keep it up, then the sky will truly be the limit for this ballclub, who gave Vinny Del Negro his first NBA win.

Who's No. 2? The SIU men's basketball team was tabbed to finish second in the Missouri Valley Conference Tuesday at the conference's Media Day in St. Louis.

The Salukis, who picked up two first place votes, will be led by preseason all-conference selection Bryan Mullins and a slew of newcomers.

Despite the offseason departures of Joshua Bone and Brandon Wood, SIU has reloaded with the additions of Justin Bocot, Ryan Hare, Anthony Booker, Torres Roundtree and Kevin Dillard.

Creighton was picked to finish first as it returns seven players that played double-figure minutes for the Bluejays, including Freshman and Newcomer of the Year P'Allen Stinnett.

Nowhere to go but up. One year removed from an MVC title, the SIU women's basketball team was pegged to finish ninth in the preseason poll.

The Salukis return only four players from last year's team and will bring nine new players to the hardwood of the SIU Arena.

Two of its returnees are starters Erica Smith and Jasmine Gibson. Smith is a defensive force who led the team in rebounding (6.8 average) and steals (54). Gibson, who only played 19 games because of an injury, is the Salukis' best scoring threat. She averaged a little more than 14 points per game, highlighted by a 31-point effort against Chicago State.

With a batch of fresh faces, SIU should be fun to watch if only to see the kind of competitors coach Dana Eikenberg has brought in.

One-liner: Want my take on Media Day? Check out another one of my media presences. [Gus Bode's Blog]