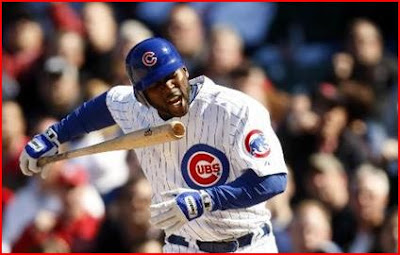 What Crazy Uncle Milton would do to Steve Rosenbloom if he had a chance.
If I were to come up with the concept of a sports blog today, rather than a little more than a year ago, I probably would call it "Bashing Milton Bradley" because that seems like the easiest thing to do in to do.

So easy, a Cards fan can do it. Easier than Sunday morning. Easier than getting into Upper Iowa University. Easier thank the sorority skank sitting at the end of the bar gulping down her eighth, ninth and tenth Long Island.

You can add Tribune blogger/glorified columnist/former sports radio host Steve Rosenbloom to the list of those who took the easy road to writing a column/blog. Lost in the outrage over Bradley's cynical comments was this tidbit that was oh-so-easy to ignore because it made too much sense.

"It's nice, but I don't think we're going to get any nicer articles written about us. But we're in first place, so you can't find a negative in that."

Translation from the eyes of someone not looking to use Crazy Uncle Milton as a jump-off: "First place is nice, but it's July 26, not September 26."

Also, take note the different lead ins between the columnist and the beat writer. You know, the guy who follows the team religiously.

"A crowd of 41,528 seemed to enjoy the fact the Cubs overcame a lot of adversity to get to the top spot, though some, like (Milton) Bradley, downplayed the accomplishment."

"As usual with the guy whose motto must be “Surly to bed, surly to rise," Bradley offered some comments on sweeping Dusty Baker’s typically bad team and jumping over the dreaded Cardinals..."

Then he followed with:

"Here’s a tip, pal: Nice articles are easier to come by when you don’t sound like a self-pitying brat. Just saying."

It doesn't take a baseball connoisseur to figure out that Rosenbloom's column is slanted more than a weigh scale that has Bartolo Colon on one side and Alexei Ramirez on the other.

Then there was this quote, that instantly made me stand applaud Milton Bradley for something that had to do nothing with on the field stuff.

"Are we going to stop getting bashed by everybody, articles about our lineup and how it was better last year and all that garbage. Last year's team is sitting at home, just like everyone else. There's just one champion."

Translation: "There's no point of popping too much wood at the sight of being in first place in July when there's still two-and-a-half months of baseball to be played."

Look, if you want to be happy with being in first place in the middle of July, then you can join the "It's Gonna Happen" guy, the Can The Cubs Mend My Heart Guy and all those stupid attention-seeking whores in a circle jerk. Don't get me wrong, division titles are nice. Winning a baseball division title means you have to be better than five other teams for the majority of a 162 game schedule. Think about how hard that is, numbers wise.

Cubs fans, you should always remember that your beloved Mark DeRosa didn't lead the Cubs to a World Series. Heck, in two years, he couldn't help the team win one game. So, does that mean if Bradley is a part of a Cubs team that wins one measley playoff game (a feat that hasn't been reached on the North Side since 2003) -- does that make him a savior?

Probably not. It will likely take a walk-off home run in each and every game of the playoffs for Cubs fans to side with Bradley.

Until then, Crazy Uncle Milton has the right to go batshit crazy upside the head of Rosenbloom or any other dumb columnist looking to get off easy on a column.