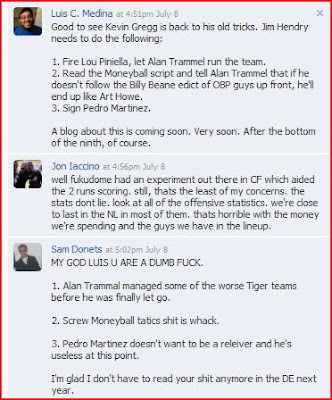 A long time ago in a blogosphere far, far away, this blogging outfit presented a feature called TBDS Late Night which reported on late-breaking news and provided games to watch for and links to read at your own peril. Once in a while, yours truly will revive that segment when necessary. This is one of those times.

Looks like yours truly is bringing back TBDS Late Night as a full-time segment. Maybe, but it's just how my current schedule and news has playded out. But enough of the chit-chat. Let's cut to the gravy.

For the longest time I have compared being a Chicago Cubs fan to being in a real bad relationship, if only because of my past transgressions.

Furthermore, the Cubs have proven to be nothing more than a tease. Take the last three division winners. They all had charming personalities and did some things that brought a smile to your face. But in the end, they left you truly unsatisfied and wanting more as they didn't go all the way. And after taking three-of-four from second-place Milwaukee, they dropped two-of-three to Atlanta. And no, Glavine and Smoltz were not the winning pitchers of record for the Braves in either of those occasions.

So after another disappointing loss, I decided to leave a few suggestions for the Cubs on a friends Facebook page with a promise of more to come. And guess what, I don't break promises.

Here are five things Jim Hendry needs to do.

1. Fire Lou Piniella, let Alan Trammel run the team. Sorry Lou, you're press conferences were entertaining and your hat-tossing, dirt-kicking antics will go down in the history books, but you've got to go. Piniella has clearly lost his team. I'm not just talking about players going nutso on Gatorade coolers or umpires, I'm talking about mentally.

This team has made base-running blunders look like they're the in-thing. Mental errors like throwing to the wrong base, forgetting how many outs there are, missing signs have been an all-too-common occurrence this season. All that points to the man in charge.

If the Cubs were oh-so-willing to fire Gerald Perry (hint, the whack bats aren't all his fault), they should be equally firing the manager who helped get them there in the first place.

As for Tram, read below.

2. Read the Moneyball script and tell Alan Trammel that if he doesn't follow the Billy Beane edict of OBP guys up front, he'll end up like Art Howe. Anyone know where Art Howe is? I didn't think so. And with the way the Cubs are built, the Moneyball-esque charade might actually work with this team. And a hat tip to Steven Jung who said: "If a team with a 140 million dollar payroll has to go with a Moneyball strategy, then 3 words. WE ARE FUCKED."

I couldn't have said it any better myself, but there is a baseball team in Bosotn that has applied the Moneyball concept to a high-payroll situation. And all the Red Sox have to show for it is two World Series titles and a lead in the AL East.

No one's running on this team and station-to-station is going to have to work until Soriano and Theriot learn how to put one foot in front of the other and swiping bags like Robin Hood.

3. Sign Pedro Martinez. Ryan Dempster is out 4-to-6 weeks, and I'll lean more to the six-week mark beause Demp will probably stub his toe on the washer or dryer as he's doing his laundry. Martinez would be the security blanket for when Rich Harden gets injured and/or Randy Wells comes back to earth. And since the Cubs aren't getting Roy Halladay or Jake Peavy, signing Pedro to an incentive-laden deal for the rest of the year is the most cost-efficient move for the Cubs.

Martinez owns a career record of 91-55 with a 3.06 ERA and 1.091 WHIP in the second half, and if that isn't attractive to you, then you, my friend, are baseball retarded.

4. Trade For Matt Holliday. I don't care if you have to go to Oakland, go through the black hole of Raider Nation, handcuff yourself to Billy Beane and trade anyone in the minor league system not named Josh Vitters to get Holliday, get it done. Then sign him to a long-term deal and place him in the outfield for the next five years.

5. Resign. Bye, Jim. Thanks for your time. Ted Lilly will probably go down as your best free-agency signing ever. And that Rich Harden deal was pretty sweet, too. But you have yet to conquer the buy-low, sell-high concept.

To be honest, you were at your best when Lou Piniella was helping you do your winter shopping. Oh, you say Piniella is unemployed? Forget what I said about banishing him, just send him upstairs and get him a nice suit to wear.

I am OK with most of what you said. Pedro, however, has not had a first half, so the second half would be his first half which is not as good as his second half. Wait, I'm getting confused. Anyway, let's leave Pedro out there unless he has been working on his hitting from the left side of the plate. The Cubs are pitching and will continue to do so without Dempster, but offense is what they need to concentrate on if they are going to make a trade with the intention to help this season.