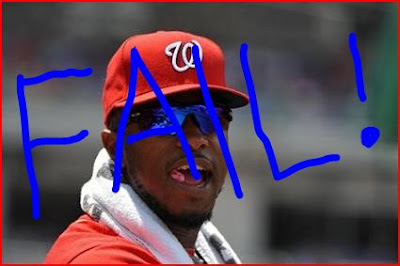 If the Cubs win the NL Central in 2009, they could probably send a thank you card to the Washington Nationals. The Nasty Nats' pitching staff won't remind anyone of the mid-90s Atlanta Braves. Nor will their offense remind you of Murderers Row. But when it came down to it, the Cubs looked to have regained their swagger at the expense of baseball's worse team.

Simply put, the Montreal Expos Nationals are baseball's starter girlfriend. When everyone else turns you down, calls you ugly, says they have to wash their hair every time you ask them out, the Nationals are there waiting for you to walk all over them. They are baseball's slumpbuster, except, if you ask Nats fans how the team looks after a few drinks, they'd still say "ugly" without flinching.

How bad are the Nationals? Here's where I begin:
And what did the Nationals do to remedy the situation? Oh, nothing. They fired manager Manny Acta and replaced him with bench coach Jim Riggleman, who has not put together a winning record as a skipper since he led the Cubs to the NL Wild Card in 1998 in a season that saw Kerry Wood's arm emerge, then explode and Sammy Sosa's head do the same thing.

Funny thing about that is that was Riggs' only winning season as a manager. Sad, but true.

The only thing that can save Washington baseball now is retraction. Ryan Zimmerman is good and will be great. Adam Dunn is a nice piece for a contender, not a rebuilder. And Nick Johnson, Nyjer Morgan and John Lannan are serviceable ballplayers. Stephen Strasburg can come in tomorrow and go undefeated in each of his starts and I would still be able to guarantee to you that the Nats would still finish at least 20 games under .500.

It's time to toss 'em to the side, for there is not a federal bailout big enough to save the only team that can make the 2009 Chicago Cubs look like world beaters.