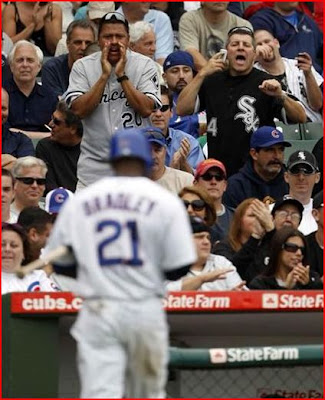 I'm pretty sure I might be Milton Bradley's only fan.
I might never understand my fellow Cubs fans. No, not the beer-swilling, babe-chasing Wrigleyville Chads. Instead, I'm having trouble finding a common ground with the baseball enthusiasts, especially when it comes to Milton Bradley.

There is no denying being disappointed with Bradley's performance this season. Cubs fans expected more than a .246 hitter after he signed a three-year $30 million deal coming off a season in which he led the American League in on-base percentage (.436) and OPS (.999). Bradley's struggles are amplified even more when compared to the numbers Bobby Abreu, Adam Dunn and Raul Ibanez are putting up this season.

There was a segment of Cubs fans that were giggly when Steve Stone created a monster (via Twitter) that said "Rumor is that tigers are interested in trading for milton bradley. Cubs should fly him in a private jet." and Bradley was not in Saturday's starting line-up.

Statistically, there is no doubt in my mind that the Cubs need an upgrade out of right field -- a position they have struggled to fill since Sammy Sosa walked out on the team in 2004. And a small sample size indicates Bradley is starting to come out of his season-long funk. His OBP has gone up every month, which suggests his eye at the plate is getting better.

But for a fanbase that has reamed players like Alfonso Soriano and Aramis Ramirez for the perception of not trying hard, how can said fanbase turn around and rip Bradley, who manager Lou Piniella claims part of his issues come from his passion to be perfect. When asked about his struggles in the media, Bradley doesn't blame anyone but himself. His fielding deficiencies, blamed no one but himself.

I was once told a good worker doesn't blame his tools. Bradley has had a billion opportunities to do so this year. But he hasn't. As a Cubs fan, I appreciate someone putting out a 100 percent effort despite their shortcomings. It would be easy for Crazy Uncle Milton to shut it down and collect what's remaining on his contract.

But that's not the kind of player he is, and Cubs fans should applaud that.