A Moment Of Venting, Then Off With TBDS Late Night 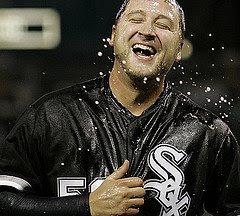 What does this Mark Buehrle picture have to do with this post? Absolutely nothing. But I'm pretty sure this was the proper way to celebrate Mark Buehrle Day in Illinois.

Anyway, as I make my swift (and hopefully unnoticed) exit from work, i'd like to take a moment to address former St. Louis Cardinals great and baseball "analyst" Jack Clark.

I do not know how on earth Cardinals fans are able to put up with this pompous excuse for a baseball analyst. Yes, he was a Major Leaguer but once again it is proven that just because you were serviceable as a big leaguer doesn't mean you are worth a minute of my time.

Last night, it was his analysis of Manny Ramirez that had me lost for words that I could say in front of the family.

The gist of Jack The Ripper's rant was that Ramirez, an alleged PED user, was bringing down the game of baseball and basically gave Man-Ram the good riddance to bad rubbish treament. Clark went on to send several more jabs at Manny and David Ortiz.

It made me think of a saying -- something about smoking throwing rocks if you live in a glass house. Apparently, it was convenient for Clark to not say a peep about Rick Ankiel or Ryan Franklin. Of course not, why would he?

That's why I laughed out loud last night when Cardinals fans gave Rick Ankiel a standing ovation in the bottom of the eighth after booing Manny Ramirez throughout the game. I understand Ankiel is one of your own, fine and dandy. But, Jack, what's the point of making yourself look stupid in front of a national audience so you can get your socks knocked off at Manny Ramirez's expense.

Stay classy, St. Louis. And remember that thing I told you about rocks.