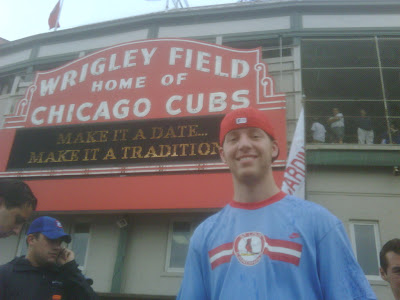 A new tradition: TBDS Day At The Park Part Deux

The SalukiOrphan finally popped his Wrigleyville cherry. I hope it was as good for him as it was for everyone else involved. Never has a Cubs loss to the Cardinals ever been so entertaining. How so? Read on.

The fun part about the Cubs-Cardinals rivalry is that it doesn't get as ugly as the Crosstown Classic games. There was plenty of trash talk, but nothing that went beyond that. In fact, the best ribbing came from a certain Cubs fan.

I took umbrage with Jeff Samardzija's appearance as I noted how much of a shame it was that Chicago's best wide receiver was playing baseball. That was greeted to some laughs. After his craptacular performance, yours truly chanted "please play foot-ball" which received the loudest applause from Cubs fans since Derrek Lee's game-tying homer.

On the other hand, I wasn't appreciated as much when I made a crack about the scoreboard painting race between the pint-sized double-play duo of Ryan Theriot and Mike Fontenot in which I called Mike Fontenot a midget. The lady in front of me, a woman with a Fukudome jersey, called me out in quite a snarky tone saying to be careful of what I say. I apologized in principal, but then she said "you never know when someone might have one, like me."

Cubs fans have proven to be soft, especially in the last few years. This is more proof of it.

Cards fans, don't think you're off the hook just yet. You're not going to get away walking with a halo. Though you should be commended for making the trip to Chicago. But unfortunately for you good folks, you have to go back to St. Louis. Have fun with your arch, provolone-cheese pizza and your once-proud joke of a football team. Not to mention your college hoops squad coached by Rick Majerus.

I was awfully disappointed with the douchiness of some of the St. Louis faithful. Nothing says "I'm a homo" like wearing two double-extra small wife-beaters with sunglasses you swear were from the unisex section. Also, this is the Midwest, no need for the spiked gel hair that birds could use as a perch.

You make me sick.

Lady behind me after Hoffpauir hits meaningless double: "Why isn't he playing more?"
Me: "Because he's hitting .242."

"Pitching to Albert Pujols is like cheating on O.J. Simpson. What results in the end won't be good."

Me: "Do you know how I know we're at Wrigley Field?"
SalukiOrphan: "How?"
Me: "Because there's pretty girls at this ball park."

SalukiOrphan: "I paid all those cute girls to wear Cardinals shirts."
Me: "I knew you were a good friend."

Me (after the tarp is removed after early rain delay): "The playing field looks great. Thanks Big Z and Albert!"

I can't count the number of Tony LaRussa drunk driving jokes I made during that ball game. All I remember that for most of the game, they were coming every half hour. One of the better ones came after I overheard a Cards fan say LaRussa was the "driving force" behind the Cardinals' success this season. To which I responded "I don't want LaRussa to be driving anything around me."

There were also countless lawn mowing references, especially after learning that several fans in the area had read The Big Dead Sidebar's most infamous post. That also helped inspire the "Cardinals fans can read" joke.

THE HATRED FOR TLR

An aside: F*** you, Tony. I know you read The Big Dead Sidebar. How? Because you sued Twitter over an account that mocked you and apparently it made you look bad. People mock me and make me look bad all the time. And you know what I do about it? Nothing. I write a blog in which its baseball posts generally revolve around statistics. Or in your case, a very entertaining DUI video.

But for you to swap Brett Thompson for Chris Carpenter on TBDS Day At The Park Part Two is crossing the line, pal. It was totally unnecessary. The only logical reason to do so would be to make me suffer on my one weekend homecoming to Chicago. Well, guess what Tony, you won. But guess who won more? Me.

In fact, everyone one this weekend. Sure, SalukiOrphan got to see his beloved Cardinals win at the holy ground that is Wrigley Field. But...I got to make you the butt of nearly 75 percent of my jokes.