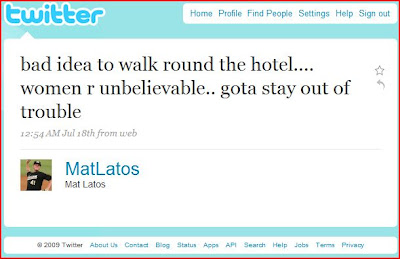 Mat Latos is the most prized arm in the San Diego Padres' farm system, and had himself quite the debut against the Colorado Rockies. Four innings, two hits, three runs in an outing in which he threw only 75 pitches.

But it was Latos' head that makes me think he is long for the big leagues.

See, I have it on good authority that the young ladies in San Diego are among the most attractive in the whole world. It kind of makes me wish they were all California girls. Alas, if Latos can turn down Road Beef in the city that boasts some of the world's best looking women, he will avoid a similar fate suffered by Steve McNair.

And really, how can you root against a guy who has the MLB logo tattooed on his body.