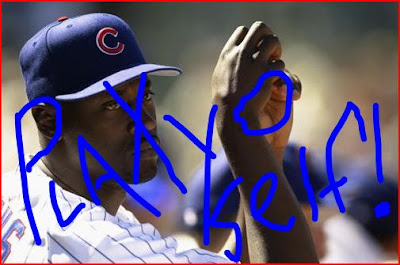 Dear LaTroy: A message from TBDS.

When Hawkins was a Cub, his numbers weren't terrible -- on paper. 2.76 earned run average, 29 saves and a 1.099 WHIP in 98 career games looks good to the naked eye, but his attitude and his inability to close games down the stretch in 2004 are the reasons he will go down in Cubs lore as one of the all-time free agent busts.

That, and his crummy attitude.

He did nothing but blame others for his shortcomings. Teammates, fans, media members -- none of whom were safe from LaTroy's wrath. And while his mechanics are different since finding a new home in Houston, his attitude apparently hasn't.

Paul Sullivan from the Trib drops this nugget on us via the Internet:

Houston reliever LaTroy Hawkins may be looking at a hefty fine from Major League Baseball after claiming plate umpire Mike Everitt "wanted" the the Cubs to win Monday night's game.

Hawkins was ejected by Everitt in the eighth inning after disputing a called ball to Aramis Ramirez and continuing to complain after Everitt ordered him to "knock it off." ... Hawkins sounded off on the ejection to the Houston Chronicle.

"Maybe he was having a bad day," Hawkins said. "I thought he had determined who he wanted to win the game anyway."

Some things never change, do they, LaTroy? It was only in 2004 when he gave up a big blast to Albert Pujols at Wrigley Field in which Hawkins blamed the fans for his struggles. A head scratching moment that caused me to think:

Alas, the Hawk Squaks again, blaming someone else per usual. Dusty Baker will probably have his back, but none of his teammates should. Nor should the fans. They're probably next on the firing line.