Bigger Breaking Video News: Pacman Jones Or Erin Andrews? And Other Things On My Mind 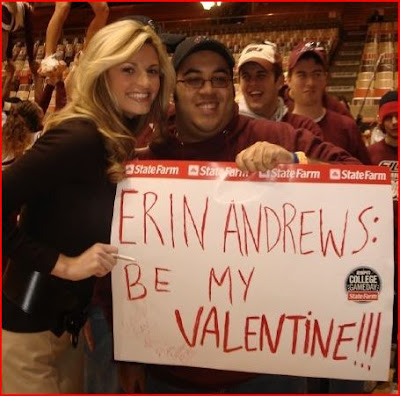 The Internet is back up in my neck of the woods. Three cheers for Verizon Wireless!

And now that I have access to the free exchange of thoughts online, here are some from my end.

I knew the following things coming into this weekend:
Yet, they all made headlines this weekend. Big headlines. Let's tackle these in order, shall we?

If you're a college age male who happens to like sports and watch ESPN, then Erin Andrews is probably your cup of tea. Erin Andrews has been the apple of my eye since the first day I laid eyes on her. What's not to like? Pretty. Blonde. Sports knowledge. Many men have spent countless hours in labs trying to cook up girls like her and while no one has come close to creating perfection, The Sideline Princess comes close.

So when a grainy video of a naked Erin Andrews (as best detailed by Don Chavez) came out of seemingly nowhere, it snagged headlines from the real newsworthy video of the day.

There, I said it. The Pacman Jones strip club video is more important than the three-minute EA video that no longer exists on the mainstream Internet. Because at the end of the day, it was just confirmed that The Sideline Princess looks good in the buff despite creepy, grainy video. I could have guessed that without the video evidence.

And Jones' video has so much news value. The Las Vegas Review Journal has been doing excellent work with the Pacman/Strip Club stuff all week. If someone could just get some justice from that whole situation, it's a big win not only for the LVRJ, but for journalism in general.

Somewhere the Erin Andrews Legal Crew searches for someone to sue their pants off ... assuming they are not already around that person's respective ankles.

In leiu of the Cubs' sweep of the Montreal Expos Washington Nationals, I'm going to withhold several punchlines from an upcoming blog. Instead, I'll talk Stephen "The Savior" Strasburg.

Words cannot describe how bad the Washington Nationals are. At 26-65, they're wasting an All-Star season from Ryan Zimmerman and your run-of-the-mill Adam Dunn season that will end with him hitting 40 homers, driving 100 ribbies, getting on base at a .400 clip and a zillion strikeouts. Nyjer Morgan is a poor man's Juan Pierre, while Christian Guzman and Nick Johnson are servicable at their positions.

But the fact of the matter is that one pitcher cannot save this so-called "franchise" from being among one of the all-time worst in baseball history. Not Cy Young. Not Bob Gibson. Not Roy Halladay. Heck, Nolan Ryan could come out of retirement right now and be the ace of the staff at the ripe-old age of 62.

I'd advise Strasburg to not sign with the Nationals and go the J.D. Drew route to avoid that train wreck and hope Bud Selig comes to his senses and retracts the Nationals.

If he's lucky Bud Selig will make the Nationals disappear.

I guess I'll take any criticism for defending Lou Piniella for keeping Alfonso Soriano in the lead-off spot. But I guess former Bears defensive coordinator Greg Blache's rant about numbers lying like your brother-in-law is somewhat true.

Since dropping to the sixth spot, Soriano is batting over .300 with an on-base percentage hovering around the .360 spot. He two homers over the weekend, but beyond that, Soriano just looks better at the plate.

His plate discipline has actually gotten better. Part of it is because pitchers aren't necessarily afraid of walking him in front of the likes of Mike Fontenot and Koyie Hill. If I was Sweet Uncle Lou, I'd not only ride this out, but I would try to maximize this.

This is where I suggest Piniella throw's down the hit-and-run sign once in a while. And, to a greater extent, the straight steal sign. If healthy, Soriano has speed to burn and could help spark an offense, that prior to the cure-all that is Nationals pitching, that struggled mightily throughout the first half of the season.