TBDS Late Night: Baby, You're An All-Star. Let Me Show You My Signing Bonus 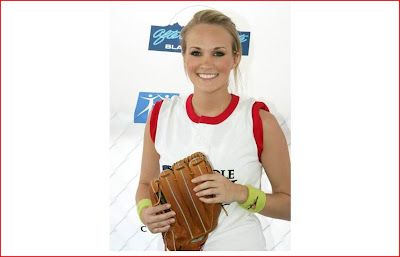 Carrie Underwood is an All-Star in my book. (Image Credit: Chickipedia)

We're only hours from first pitch from the All-Star Game, also known as Pujolspalooza. Here is some advice for NL manager Charlie Manuel. If he's wise and wants home field advantage in the World Series, he'll listen.

If that formula doesn't win for the National League, no formula ever will.

But enough about actual All-Star games, because game action won't start until 7:40 p.m. and you'll probably go to bed around 10:30 p.m. or the top of the third inning ... whichever comes first. So, let's talk about some All-Star ladies. Plenty of those are in the news, especially with the reports of Jessica Simpson newfound free agent status.

It got me to thinking about what kind of All-Star team I could put for myself. Also known as the most attractive girls I'll never get with. Enough small talk, let's cut to the gravy.

No. 1 Starter - Jessica Biel - The ace of the rotation.
No. 2 Starter - Scarlett Johansson - The total package, and unlike a lot of players in this game, she's all-natural.
No. 3 Starter - Jessica Alba - She could be an ace in any rotation. Her versatility as a blonde and a brunette can be very, very valuable.
No. 4 Starter - Megan Fox - This pic brings new meaning to "back-end of the rotation" amiright?
No. 5 Starter - Mariah Carey - Any team's rotation needs a durable fifth starter, and no one's been doing it longer on this franchise than Mariah.
Set-up Reliever - Eva Mendes - She's the Carlos Marmol of this squad. She's the fire-throwing Latina who with one glance can make your knees buckle.
Closer - Keelly Hazell, Stacy Kiebler, Anne Hathaway- In Billy Beane's world, anyone can be a closer. And since I am the self-proclaimed Billy Beane when it comes to scouting the ladies as I look at undervalued stats such as book smarts, street smarts, sass and sense of humor, I've got to suscribe to his theory.

On The DL - Lindsay Lohan - Lohan was a hot prospect coming up in the game, but got burned out thanks in part to some bad management. Reminds me a lot of the Kerry Wood story, so when she comes back, she'll come back as a hard throwing reliever. She's spent more time in rehab than Mark Prior.


Heck, I'm the guy who finds a girl who reads/recites/writes poetry, likes picking up the Sunday newspaper, coffee dates and stuff like that. So right now, I've got a closer by committee. Each of these girls brings something different to the table.

Manager - Erin Andrews - Like a lot of managers in today's game, The Sideline Princess' knowledge of the game from the booth will come in handy here.
General Manager - Sarah Palin - Experience in a position of power? Check. Sexy librarian glasses? Check. Good enough for me!