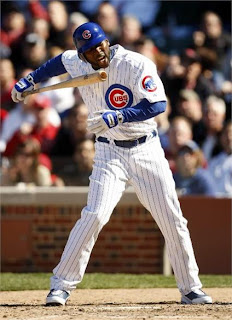 It has been a long time since I cared about wrestling. A lot has changed since then. A black guy is the president of the U.S.A., the Bears have a Pro Bowl quarterback, I need two hands to count the number of girls I've kissed. Unfortunately, the Cubs have still yet to win a World Series.

The Cubs' slugging left fielder attended Sunday night's World Wrestling Entertainment (used to be called World Wrestling Federation before the World Wildlife Fund got into the fray) at the Allstate Arena in Rosemont, Ill., and was greeted by someone named "The Miz." A character with that moniker sounds like some type of cross-dressing hooker you would find on the other side of the tracks.

Not that I would know anything about that. I digress.

Anyway, after a brief introduction The Miz went on a roasting session of the spectating Soriano, which rated only slightly higher than something a White Sox fan with an elementary education would spew.

Surely there was one Cub that would not stand for such a verbal thrashing, and thankfully for the WWE, he was not in attendance. And that would have been Milton Bradley.

And all Vince McMahon would be able to do is watch helplessly and think "This isn't part of the script."