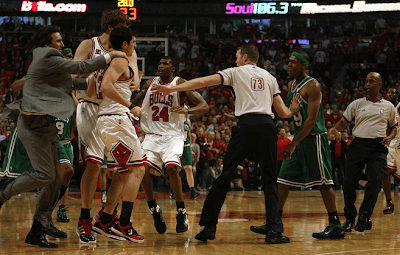 Will fight night take its stuff to Boston? via Awful Announcing
What does Rajon Rondo have to do to get suspended for a game?

Long story short, Rondo has turned his fued with the Bulls into a WWE grudgematch. A rake of the eyes to Brad Miller in Game 5 was one thing, but tossing Kirk Hinrich onto a scorers table and perfectly executing a flying elbow drop from the rafters is something else.

So, what will we see tonight? Hogan's leg drop? Some Sweet Chin Music? How about the People's Elbow? Personally, I can't wait until Rondo takes a steel chair and blindsides an official.

While some experts say there is no pressure for the Bulls to perform as they come into the series' final game, I respectfully disagree. The Bulls will head into hostile territory in a winner-take-all Game 7 ... that's pressure in its own right. But having already won once in the new Garden, and having only lost the other two road games by a combined total of five points, it wouldn't surprise me if the Bulls put it all together.

On the other hand, I would not be surprised if the Celtics came out firing on all cylinders and beat the Bulls by double digits. And if that happens, The Greatest Playoff Series Ever will quickly turn into just another playoff series in which a Chicago team fell flat on its face.

So what the Bulls need to do? Ben Gordon needs to score at least 20. Derrick Rose needs to stay out of foul trouble. Kirk Hinrich needs to continue to hit shots and play defense. And Tyrus Thomas needs to not take 20-foot contested jump shots. If all that happens, the Bulls still might lose ... but they'll have a much better chance at winning.

In either case, I'm ready to witness Game Seven: The two most exciting words in sports.