Here Is One Big Effen Thanks To The DE 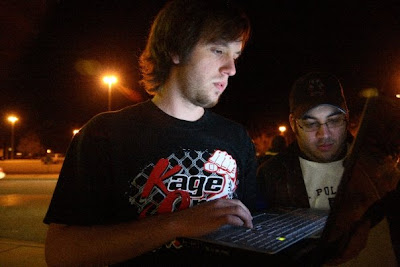 The Daily Egyptian is the student-run and student-operated newspaper of Southern Illinois University Carbondale. That sentence has been drilled in my head since even before I was on the DE staff. In fact, here's a little background.

Since the day I stepped onto the SIU-Carbondale campus, my dream/goal was to write for the DE. Some people laughed at my dream of writing for a student newspaper. But hey, big dreams start at small places. And in three semesters that went too damn fast (in my humble opinion) I went from correspondent, to rookie on the sports desk, to Assistant Sports Editor to Sports Editor.

So, here is me thanking the people who helped me along the way.

First, a thanks to Sean McGahan for convincing me to apply when I was almost scared off by the crap the DE got from some folks for their coverage of Poshard's plagiarism incident. Good journalism is often met by resistance, what can I say? Then I thank Sarah Lohman, who was the Editor in Chief that hired me. Next is DE writing coach Wendy Weinhold, who dealt with my persistent e-mails about whether or not I was going to be hired.

The next thank you goes to Brian Feldt, who took an internship to work at the Peoria Journal Star and opened up a spot on the sports desk for me. And thanks to my first sports editor, Jeff Engelhardt (pictured) for not only taking a chance on me on his sports desk, but for dealing with my struggles. Same for Matt Hartwig (yes, TBDS co-founder Matt Hartwig), who often times edited my crap and put me in my place. I guess thanks to Jordan Wilson for being a good mentor and being the other North Carolina Tar Heels fan in that newsroom.

Thanks to all the photographers including Lane Christiansen, Emily Sunblade, Edyta B (no, I'm not even gonna try to spell your last name haha), James Durbin, James McDonnough, Evan Davis, Julia Rendleman, Brandon Chapple ... and all the others I missed. Thanks to Anthony Souffle' for being an awesome road trip partner. And this a very big hat tip goes to Ryan Rendleman, for you will always be remembered in my heart.

Special thanks to Allison Petty and Diana Soliwon ... who will get a special mention in a later blog.

And a very special thanks to all of you who get those little iChat messages from me throughout the day and don't come to my desk and rip my head off. Don't worry, you'll miss it when I'm gone. Speaking of missing people, I'll probably miss the copy editors more than I should, because I'm pretty darn sure I didn't spell everything right in this blog.

A big thank you goes out to DE Faculty Managing Editor Eric Fidler, who rode me until I busted my ass in class and in the newsroom. For some reason or another, he always knew the right thing for me to focus on in my story. He's good. And thanks to Eric and Jerry Bush for sponsoring those road trips in Fall 2008.

Thanks goes out to printshop guru Blake Mulholland, for being the Cubs fan to balance out Cardinals Nation.

Oh, and I can't forget about the professors that helped me get here including: Bill Babock, AJ Stoner, Bill Recktenwald, Bill Freivogel, Uche, Mike Lawrence, Laura Hlavich and everyone else that I am forgetting. I learned so much from them and feel honored to have been guided by their expertise.

Last, but not least, a shout out and thanks to Jack Young, the best adviser in the entire university for not only getting me into classes that wouldn't kill me, but also for being an avid Saluki fan to talk to and exchange stories with.

And for the official final word, thanks to all the friends I made along the way. Here's to you. All of you.

Very nice. OK, got to point out that the Daily Egyptian can be found at http://www.siude.com

and for the good of SEO I will throw in the College of Mass Communication and Media Arts new website at http://mcma.siuc.edu

Lu, I will never forget you. You were the first tweeter and top blogger in your time here. I look forward to following what I know will be a successful career for you.
aj

Wonderful post friend. I'm going to miss you and your ichat messages of links to new jams and sexy co-eds.