News, Notes & Quotes From The Inaugural TBDS Day At The Park 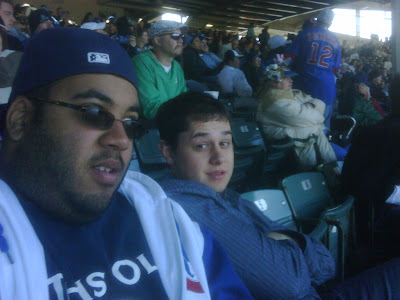 I'm on my way to Carbondale to return to an apartment that will have power, but will also a fridge that desperately needs to be cleaned out.

While I'm driving, here is some crap I put together after a day at the ballpark.

The Cubs lost. Big deal, right? Well, kind of. Losing to Brian Moehler is a bit embarassing ... mostly because he is bad. I'm convinced the Astros 3-4-5 hitters are aruably the best in the National League. Once each part of the Berkman-Lee-Tejada triumverate gets its act together, the 'Stros will be making NL pitchers miserable.

I'm also convinced the Astros marketing team, which coined that whole "Killer Bs" business in the 1990s is actually in charge of player personnel.

Biggio, Bagwell, Bell, Berry and others have been replaced by Berkman, Blum, Bourn and Byrdak.

How long until they try to swing a deal for Emilio Bonafacio or talk Darin Erstad into putting a "B" before Erstad.

This has got to happen again. Hopefully when the money is more free-flowing and the wind isn't blowing off Lake Michigan. Possibly in the bleachers. Probably in a stadium that is not Wrigley Field. I feel as if a TBDS nationwide tour could be something that is in the making.

"If I had to choose between one night with the girl of my dreams or a Cubs World Series championship ... can I have both? Seriously, I might take the girl. I think I can parlay one night into much more more, I think I'm that damn good." - Me and the great debate.