The New York Yankees Are A Joke; And I'm Laughing At Them, Not With Them 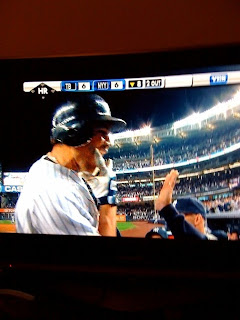 In news that doesn't involve Manny Ramirez or Brett Favre ...

(I'll pause while you cheer your little hearts out.)

The Team America Loves To Hate has fallen on hard times. Its billion dollar ballpark with $2,500 seats has become a punchline as it seems as if people are cautious upon entering The House That George Built. What? Is he a bad host? I don't know, I'd have to ask George Costanza about that one ... but there is one thing I know, America is enjoying the struggles of the Yankees.

Since 2004, the Yankees have been nothing short of a disappointment. They have been the best division winner money can buy in the mold of the 2007 and 2008 Chicago Cubs, but on a larger scale.

So after winning 80something games and missing the playoffs altogether, the Steinbrenner Bailout Plan that helped ink CC Sabathia, A.J. Burnett and Mark Texiera help put the Yanks into the spotlight.

But when spring training opened up, none of it mattered as a dark cloud rained all over Alex Rodriguez. And all Rodriguez (A-Roid, A-Fraud, A-R*d, etc.) has done is become a gold mine for journalists, bloggers and media types in search of gimmicky nicknames that attach him to performance enhancing drugs.

Then Nick Swisher comes on board, starts palling around with A-Rod and some dudes (no homo?) and eventually Swishers manager Joe Girardi into him pitching in a blowout.

Headlines of Wang getting banged around don't get old. Neither have CC Sabathia fat jokes.

And while A-Rod returns to the lineup tonight against the Orioles, the only team with a record worse than the Yankees' 13-15 in the AL East ... this game will eventually boil down to a battle of the AL Least.

As long as balls fly out of The New Yankee Stadium, unless Rodriguez developed a 95 MPH fastball and a wicked breaking pitch, it won't be worth much.

Except another laugh, of course.