Usain Bolt picked the wrong Olympics to be a star 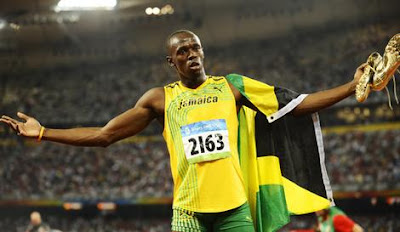 You know what has happened to all that good will built up by U.S. swimmer Michael Phelps?

Jamaica's Usain Bolt has taken it, ran with it and shattered records in the process.

Bolt's success should be more welcomed than it is, seeing that he's done something NO ONE has ever done before, but it'll be ignored to a point while everyone continues to profess their undying love for Phelps.

And I don't blame them, but if it were not for Phelps' dominance, Bolt would be up for the nomination of Greatest Olympian Ever.

Heck, if Usain Bolt from Jamaica was Michael Bolt from Miami, Florida he'd probably be an American if not world icon.

Instead, we watch from afar as Bolt continues to fly by the competition because apparently, he chose the wrong Olympiad to try to be a show-stopper.