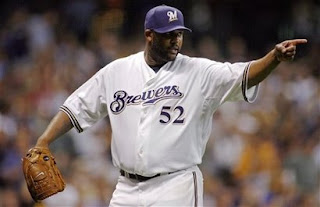 Is the defending AL Cy Young Award winner the front-runner for the NL award?

Before being traded from the Cleveland Indians to the Milwaukee Brewers, Carsten Charles Sabathia posted a pedestrian 6-8 record with a 3.83 ERA.

Then Sabathia realized he was pitching for a new contract, and since being moved to the land of cheese, CC's got an 8-0 record and a 1.60 ERA. And even though he'll only have half a year as a National Leaguer under his belt, Sabathia should get some serious CY Young consideration.

Sabathia's competition:
Not only could CC make a run at the Cy, he could land the Silver Slugger Award, too.

Johan Santana got $137.5 million just to pitch, how much could Sabathia fetch with a golden arm and a silver bat?