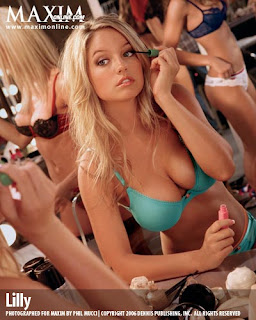 Lilly Robbins is exhibit A, B, C...on why the Chicago Bears should bring back the Honey Bears...or at least a cheerleading squad of equal or greater hotness than Robbins. Now I know why the Dolphins struggle, it's hard to concentrate with hotties like that on the sidelines.

Girls like her make me wish I could be a badass quarterback. I guess I'll settle for writing about 'em.

Today's shameless self cross-promotion: 'SIU stares down new competition' covers the freshly minted Missouri Valley Football Conference and a pair of new schools who are already in the Top 25.

Sox slappin' around the M's. The Chicago White Sox's dominance over the Seattle Mariners continued Wednesday with a 15-3 whoopin' of the Mariners.

Former Mariner great Ken Griffey Jr. hit his 609th career-homer, tying him for fifth place on the all-time home run list with former Cub icon Sammy Sosa. If not for Griff's injuries, all sustained by playing hard, Junior would likely be pissin' all over the record books. Instead, he'll just go in as the Greatest Non-Steroid Using Baseball Player of this era.

Cincy squeaks past the Cubs. Bronson Arroyo issued five walks and lived to tell about it. That's because he limited the Cubs to three hits and used a pair of double plays to help lead the Reds to the 2-1 victory.

The Reds scored their two runs on a fielders choice by Jeff Keppinger and a sac fly by Jolbert Cabrera.

Not Miguel. Not Orlando. Jolbert. Hey, you can't win 'em all, right?

Lilly struck out seven batters in seven innings of work as he moved to 0-3 against the Reds in 2008.