Daily Dosage: It's Back! 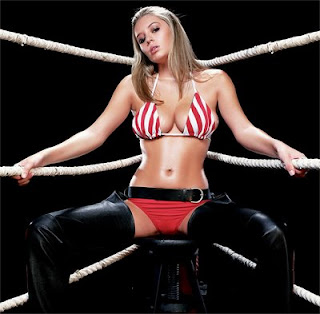 Welcome back to the new and improved version of TBDS, now with the Daily Dosage (again.) Today's hottie is British model Keeley Hazel. And to think you can have a calendar of just her, greeting you on a monthly basis. Now that's how you should kick off a new semester.
On with the Dosage!

Bye-bye, 3-0-5! The Chicago Cubs put the finishing touches on a 5-1 road trip with a 9-2 victory against the Florida Marlins. Down 2-0 going into the top of the seventh inning, the Cubs exploded for eight runs in the top of the frame behind a pair of two run doubles fromAlfonso Soriano and Aramis Ramirez and a three-run double by Reed Johnson.

Ryan Dempster allowed five hits in six innings en route to his 14th win on the campaign. Demp also punched out 10 of the Fightin' Fish for his third 10+ strikeout game this season.

The Cubs head back to the Friendly Confines for a series with the Adam Dunn and Ken Griffey Jr.-less Cincinnati Reds. Oh, and Dusty's still there too!

An A+ Effort In Oakland. After losing a heart-breaker against the A's late Friday night, the Chicago White Sox won back-to-back games to clinch the series win and keep the race in the AL Central tied.

Javier Vazquez allowed one run on four hits and punched out eight Athletics to move his record to a deceiving 10-10 mark.

Seriously, Javy should have about 15 or 16 wins now if he always pitched like he did today. He's got the nastiest stuff on the Sox staff and should be rewarded with a little run-support here and there. Good for you, Javy!

From the Did You Know department? Did you know the Chicago Bears scored 26 points in their pre-season loss against the Seattle Seahawks. Before you get excited about Rex Grossman or Kyle Orton leading a potent offense, let's recap, shall we?
And that's it. If you're waiting for a juggernaut, I hope you've got a comfy seat.