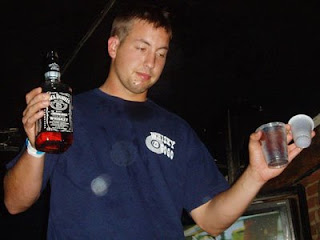 Just in time for the 6 p.m. blog, news that Kyle Orton has officially been named the Chicago Bears' starting quarterback. Orton edged Rex Grossman and Caleb Hanie and will try to completely suck.
Where's the Hawk Harrelson audio cue when I need it, because this quarterback competition is OVA!

Kyle Orton has been anointed as the chosen one and will begin his official reign of terror Sept. 7 in Indianapolis against the Colts. Rex Grossman has been regulated to back-up duties, while Caleb Hanie will be in charge of not taking after the fools in front of him on the depth chart.

Notice in the head I put wins in quotations...I did that for good reason, so allow me to explain myself.

Winning a "competition" between Rex Grossman and a rookie from Colorado State isn't really a great feat. It's like winning a spelling competition against Dan Quayle, or winning a dieting contest against CC Sabathia. Orton's "win" in this QB derby is like being named the valedictorian of summer school.

So while Kyle will likely celebrate with guys named Jack (Daniels) and Ron (Bacardi), maybe he should take the time to convince guys like John St. Clair, Terrance Metcalf and Roberto Garza to block like the early-to-mid-90s O-lines of the Dallas Cowboys. Because if they don't, he'll spend more time on his back than Paris Hilton.

OK, enough with the analogies. The point is that it didn't matter who won the QB derby because this team has bigger holes to fill. The offensive line is just that, offensive. The wide outs are led by a very talented "rookie" and an over-the-hill Marty Booker. The running backs that are expected to be counted on are a rookie and football's version of Mark Prior.

I hope there's an incentive in Orton's contract that awards him billions of dollars for winning the starting job, he'll need it for the medical bills he'll be paying after he gets blitz to oblivion.