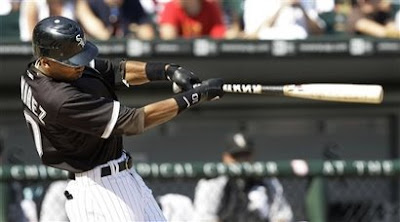 I didn't get a chance to see the game, but I assume that Hawk Harrelson's voice had to give out at some point during the Chicago White Sox's 9-2 victory against the Kansas City Royals.

Jim Thome, Paul Konerko, Alexei Ramirez and Juan Uribe went back-to-back-to-back-to-back to secure the win. And as rare as the crosstown Cubs road success has been, four consecutive long balls is even more rare, happening only for the sixth time in the history of baseball.

Despite the Sox's power surge, their lead over the pesky piranhas is only one game. How much longer can those guys hang on? Justin Morneau and Joe Mauer are stars with the stick. And Joe Nathan is nasty in the ninth. But what's the deal?

I expect the Sox to runaway and hide with this division, sooner rather than later.