CQ: Man of the Year! 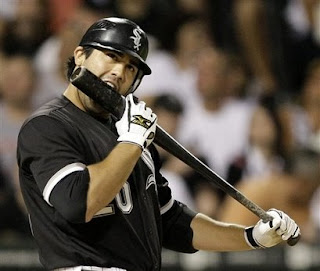 Ed. Note: Chicago White Sox slugger Carlos Quentin is in the hunt for an AL MVP award, but since he doesn't play for the Yankees or Red Sox, he won't get much love from the media. Except from me. I'm driving the Carlos Quentin bandwagon until the regular season ends!

Alexei Ramirez is a nice surprise. And Ozzie Guillen has been pleasantly not annoying. But Carlos Quentin has been the offensive force behind the Chicago White Sox's winning ways.

Quentin continued his torrid pace with his 36th home run of the season, a two-run shot off Tampa Bay Rays starter Andrew Sonnanstine, in the White Sox's 6-5 extra-inning win Sunday. The homer was Quentin's only hit, moving his numbers to .289 36 homers and 99 runs batted in. Hecurrently ranks first in homers, fourth in RBIs and third in OPS (.975) among AL hitters.

CQ continues his race towards an MVP award Monday in Baltimore against Chris Waters and the Orioles.