Alfonso Soriano is earning his keep 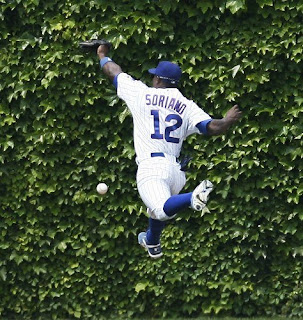 Now, the Cubs are looking to Soriano to be money down the stretch.

The Soriano the Cubs and their fans have seen recently is the player they expected coming from Washington. The Cubs are 23-8 since Soriano came off the DL for a second time and has been using all of his tools to help pace the Cubs.

He's throwing runners out at the plate.

And most important of all, he's hitting the cover off the baseball.

If Soriano can atone for the .143/.200/.143 line he posted against the Arizona Diamondbacks in the 2007 NLDS and lead the Cubs to the promised land, no one will care about the $106 million remaining on the back end of his contract