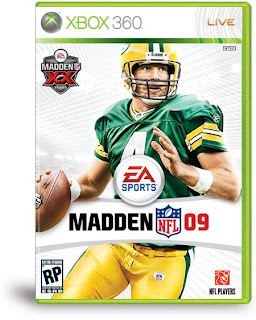 Is it too late to change that Madden cover?

If you're looking for the exquisite analysis of deal that sent Brett Favre to the other New York football team, you're out of luck. Instead, I want a different approach to the matter. So I'll give it to you by presenting three places Favre's impact will be felt the most.

Acquiring Favre makes the Jets relevant again in the greater New York metropolitan area. The superstar QB supposedly at the twilight of his career gives credibility to a team holding an open competition between Kellen Clemens (he's not Roger so he's not newsworthy) and Chad Pennington (more arm troubles than a Chicago Cubs pitcher.)

And for all you kids watching at home, if your team has two options at quarterback it really has none.
Now, with Favre sharing the island with Eli, instead of the NFL season opening up by revisiting Big Blue's Big Upset over the Pats, the football world will (again) revolve around Favre's retirement, unretirement and subsequent trade to the in-city rival. Fans of the G-Men can't be happy with the Green Machine stealing their headlines.

Are you ready for an on the field storyline? I know I am.

And even though I am sick of the New York/Boston sports headlines, how can you not ignore this one? Favre, now in a New York state of mind, really gives Bill Belichick something to spy on. The Man-genius now has a little more firepower to go up against his former mentor, hence spicing up the Patriot Games.

Not only will Favre's impact be felt on the field, it will be felt online in fantasy football. I think it's safe to say you can draft Favre higher than the 16th round he's been projected by some. I think drafting a New York Jet wideout (Laveraneus Coles? Jerricho Cotchery?) or tailback Thomas Jones could bring you some fantasy points somewhere down the line.

Should you expect Favre to throw for more than 4,100 yards and 28 TDs? Yes! Remember, he gets to play the Dolphins twice in '08.