I guess he's a Romosexual 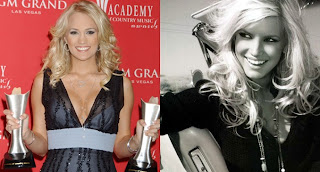 If there's one thing I can't stand it's when a guy's ball-hogging.

If you're name is Kobe and your teammates suck then it's OK, but when your name is Tony Romo and you're hogging two of the hottest blondes in the southwest, it's uncalled for.

It looks like Romo's current flame (Jessica Simpson) and ex (Carrie Underwood) are going to be sparring over the Dallas Cowboys QB again.

Jess and Carrie have been going back-and-forth since Carrie and Romo broke up. Like that whole "Real Girls Eat Meat"* shirt Simpson sported after Underwood won the Sexiest Vegetarian Award. Underwood's response: Tony's still calling me.

Ladies, there are only two ways to solve this:
Holla.