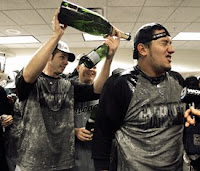 The madness that surrounds former Chicago Sun-Times columnist Jay Mariotti is not over.

The blogosphere (understandably) is still in celebration mode now that Public Enemy No. 1 is moving on. Hell, it's not just the blogosphere, everyone's joining in on the celebration.

Hell, even Mariotti's former employers are getting their digs in. Former colleague Chris De Luca dropped this barb on the newly departed former columnist.

"Word of Jay Mariotti's split with the Chicago Sun-Times reached the White Sox' clubhouse minutes after their victory Tuesday night against the Baltimore Orioles, and the reaction could be heard outside.

Once again, Mariotti should've been there to witness it first-hand.

Ozzie Guillen -- the top target of the venom-spewing columnist who called for the Sox to fire their manager this season despite the team being in first place -- said his e-mail inbox had a record number of new arrivals by Wednesday afternoon."

And don't think it's just his former cohorts that are getting at him, it looks like his one friend in the industry, Sun-Times E.I.C. Michael Cooke is getting his cuts in, too.

"We wish Jay well and will miss him -- not personally, of course -- but in the sense of noticing he is no longer here, at least for a few days."

Those are all sharp shots directed at Mariotti, who by the looks of this story, did his stories from his mother's basement. Maybe blogging is right for him after all.

The blogosphere is getting their shots in too:
How about this from former colleague (and enemy?) Rick Telander, via The Big Lead:

"There were celebrations in the White Sox locker room that was described to me as being like the final game of the 2005 World Series. At our own paper, people were high-fiving. In press boxes, people were high-fiving. I called the paper and the first thing someone said to me was ‘ding-dong the witch is dead’. I am not selecting people that just didn’t like Marriotti. I am talking about this as a professional matter as someone who could undermine so much that can’t even believe it.”

But wait, there's more. Are you ready for the buried lead? Via Deadspin:

According to two reliable sources, Mariotti, just back from Beijing, wanted to write a column on Barack Obama. But it wasn't Jay's turn to write — it was Rick Telander's — and Telander also wanted to write on Obama .... Sun-Times says no, Jay, wait your turn.

And so Mariotti, showing the maturity he's famous for, calmly assessed the situation and figured he was not going to let it bother him. Just kidding! He threw a fit worthy of a three-year-old.

Again, I revert to my first days at my current employer, the Daily Egyptian.

When I first got to the DE, I wanted to big as soon as I stepped into that newsroom. And to be honest, there's nothing wrong with that. If you don't wanna be great at something you love, you obviously don't love it. But I knew that I had to wait my turn, and I made the most of it.

In closing, I sit here at the DE making minimum wage because I love writing for a newspaper and hope to write sports (in whatever forum) when I graduate. And Jay Mariotti expects to make seven figures off a blog.

When did I miss the memo?

This, from the White Sox today.