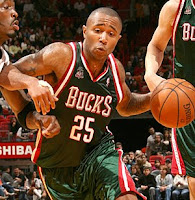 Welcome to the new edition of The Big Dead Sidebar. In the first post of the new era, I'll tackle the impact of the Mo Williams trade to the Cleveland Cavaliers.
Someone explain to me a trade that really doesn't help anyone.

Mo Williams and his 17 points per game will be a nice addition to the Cavs, but he isn't the answer. If you think the addition of Mo Williams will keep LeBron James in a Cleveland uniform, then you're wrong. The only way that happens is if Williams takes Bron-Bron hostage and holds him for ransom.

The Cavs need outside shooters. Anyone with a pulse who watched the Cavs fall a P.J. Brown jump shot away from a spot in the Eastern Conference Finals knows that.

LBJ is a point guard in a power forward's body. Why doesn't Danny Ferry take a clue and surround the franchise with the type of sharp-shooters that will keep Flight 23 from taking off to New York City?

As for the Bucks, they're left with a billion point guards. You're talking about finding two regular contributors out of Luke Ridnour, Romain Sessions, Charlie Bell, Damon Jones and Tyronn Lue.

And even if they do that, they need to figure out what to do with the million small forwards they have. Finding playing time for Richard Jefferson, Joe Alexander and Luc Richard Mbah a Moute is as likely to happen as chefs finding a big enough cake for CC Sabathia and Prince Fielder.

Good luck with that, Scott Skiles.

As for the Sonics, the only sense I can make out of the deal is the return of Desmond Mason for his second stint with the Seattle/Oklahoma City franchise. Sounds like a marketing ploy to the locals, who saw Mason star at Oklahoma State University.

And for those Okie State fans waiting for D-Mase to unleash his ridiculously mad hops, your best bet will come in a blowout because it's unlikely he'll see any playing time in front of Kevin Durant and Jeff Green.

Good luck with that, nameless and faceless Oklahoma City Sonics/Thunder/Whatever Your New Team Name Is coach.

Ed. Sidenote: When I clicked on the OKC team Web site, it initially came up as "Seattle Supersonics" on my tab key before changing to "NBA OKC." Looks like breaking up really is hard to do.

Until the OKC franchise finds a name for itself, enjoy another episode of the Mo Williams Show!