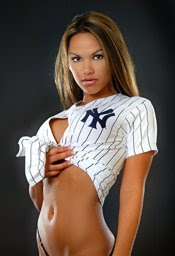 This is random Yankees girl. I'd love to take credit for finding her, but kudos to Deadspin for this great grab.

Now that TBDS can successfully move past the Mariotti Era, the site can run as normal again which is great for us the writers and you, our beloved reader.

Enough nonsense, on with the Dosage (with an hour head start)!

As for today's shameless cross-promotional item: The SIU women's tennis team continues to rebuild under the watchful eye of second-year coach, Audra Nothwehr. They should be better than the 11-12 record they posted last season [Daily Egyptian]

And always check out siuDE.com for more!!!!!

Cubs sweep Pirates, whose fans hate Aramis Ramirez for some reason. Jason Marquis (a.k.a. Bi-Polar Betty) pitched seven strong innings and got the support of a perfectly executed suicide squeeze as the Chicago Cubs beat the Pittsburgh Pirates, 2-0.

Marquis' stellar outing came hours after being called out at HJE, for once again, he has struggled down the stretch. Truth be told, he hasn't been terrible this year. When he's been bad, he's suffered through one bad inning.

Unfortunately for Marquis, that won't be acceptable in the playoffs. It won't matter when October rolls around when Dempster, Zambrano, Harden and Lilly (in that order?) take the mound while No. 21 watches from the pen.

And by the way, who was that handsome fellow playing center field and left field for the O's this evening? Luis Montanez? Say what?

Montanez was the Cubs' No. 1 draft choice (No. 3 overall) in the 2000 amateur draft. He was a highly regarded shortstop prospect for a while, but never panned out with the Cubs, it looked like the North Siders gave up on him too quickly. Go figure.