Is It Time To Give Han-Ram The Soriano Treatment? 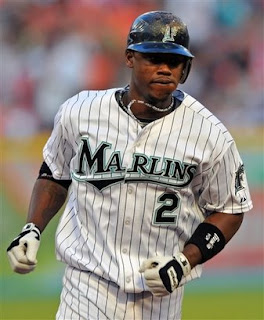 Hanley Ramirez is one of the five most exciting players in Major League Baseball.

The Florida Marlins star is as close to a five-tool talent as South F-L-A will get. He can hit for average (.297), power (27 home runs), has good base running skills (28 steals), and is a slick fielder with a rocket for an arm.

Yet, Han-Ram is lacking in one statistical field. Runs batted in.

Despite the 57 extra-base hits and an OPS of .928, Ramirez has only 56 RBIs, which is 14 less than team leaders Mike Jacobs and Dan Uggla. Those RBI numbers are down primarily because Ramirez and his .392 OBP sit atop the Marlins' line-up.

It doesn't help that the bottom of his team's order consists of Cody Ross' .257 batting average, Jeff Baker's .226 batting average and the pitcher spot.

Like his fellow Dominican Republican, Ramirez is miscast as a lead-off man and would best fit into the No. 3 slot in major league-quality line-up. You know, the one where a player with the rare combination of speed and power can thrive with high-OBP guys in front of him.

Until that day comes, Han-Ram will thrive as a 27 home run 70 RBI top-of-the-order guy.