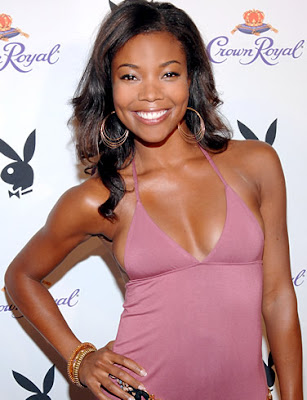 Today's eye candy is Gabrielle Union. She's underrated as an actress and as an absolutely drop-dead gorgeous woman. Remember when Nelly coined her a "young Janet Jackson, live in livin' color" because I do!

But Union is a hotter, more talented person whose family doesn't contain a whacko named Jacko. Here's to you Ms. Gabrielle Union.

Today's selfless cross-promotion: SIU football is running the spread and the 3-4 defense, but how did it get here? [Daily Egyptian]

And always remember, check out siuDE.com for more.

Harden hexes Nats. If you have Chicago Cubs starter Rich Harden on your fantasy team, you're having a good year.

Harden struck out 11 batters, and with the help of homers by Geovany Soto, Mark DeRosa and Kosuke Fukudome, defeated the Washington Nationals, 6-1.

Sox avoid Rays romp. The Chicago White Sox fended off the sweep at the hands of the first-place Tampa Bay Rays (that feels weird typing, still) by winning 6-5 in extra innings.

Carlos Quentin hit his 36th home run on the year and A.J. Pierzynski found himself at the center of another Doug Eddings controversy, chronicled here.

The Sox's win, coupled with the Twins loss puts the White Sox back in first place in the AL Central.