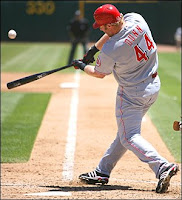 Yesterday, I chronicled the fall of Richie Sexson after the two-time All-Star and former Cub killer was waived by the Yankees. Today, a look at Adam Dunn who will be taking his Cub killing ways west to Arizona, who was last seen sweeping the Cubs out of the NLDS. Does he have a little Steve Garvey in him?
Let's just get this out of the way right now: Adam Dunn is this generation's Dave Kingman.

Ignore the Big Donkey's career .247 batting average for just a moment and realize he's slammed 270 homers and drove in 648 runs in his eight year career. Oh, you don't believe RBIs is a telling enough statistic for an offensive force, how's that .899 OPS sound to you?

Anyway, Dunn was traded to the Diamondbacks so it looks like his days of torturing the Cubs are over, for now.

So if you're looking at the trade with blinders on, you're probably thinking this is a great trade, seeing that the Cubs get to play the Reds six more times with Adam Dunn out of the line-up and Corey Patterson in it.

Westward bound is Dunn's .260/.398/.619/1.012 line against the North Siders in exchange for three prospects whose talent will be ran into the ground eventually by Reds manager Dusty Baker.

Dunn's acquisition by the D'Backs was a counter move to the Dodgers' deadline addition of Manny Ramirez, who is batting .423 with a 1.293 OPS in Dodger Blue.

So while the Cubs must fend off the (Self) Battlin' Brewers and the Can't Quit Cards, they're biggest competition come October just might be out west.

Lest we forget about the powerful line-up possessed by the Philadelphia Phillies or the overall talent residing in Flushing, NY with the Metropolitans?

No one said this 100-year thing was gonna be easy, but these deadline deals are making it a wee-bit more difficult.