Brewers fans have got to be thinking 'here we go again' 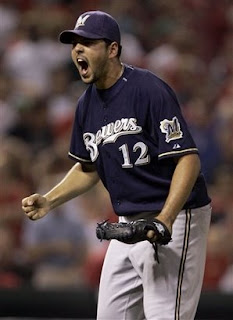 Ned Yost's boys are at it again.

Reliever Carlos Villanueva's reaction after retiring Joe Mather with the bases loaded in the seventh inning helped spark the St. Louis Cardinals to a 5-3 come from behind victory against the Milwaukee Brewers.

You really can't blame Villanueva for being excited, with a 4.35 ERA and 1.33 WHIP, I'm surprised he can get anyone out, let alone a guy hitting .246.

Cards first baseman Albert Pujols took exception to Villanueva's "excessive celebration" and took it out on David Riske in the eighth inning. Pujols lead off the inning with a double and the rest of the Redbirds followed in suit, scoring four runs to over take the Brew Crew.

Like when they started a bean-ball war with the NL Central title in the balance last season?

Starting shit against your closest competitor in the Wild Card with over a month to play isn't smart. Had the Brewers won Wednesday night, they would have pushed the Cardinals 5.5 games back and had them reeling off a brief two-game sweep in their home ballpark.

Instead, a split leaves Fredbird's gang only 3.5 games out with plenty of confidence headed into Houston to take on the Astros. And they don't even have to face Roy Oswalt this upcoming weekend.

Are you ready for another classic collapse?

Let's see if the Brewers follow in a great tradition they began last fall.