B.J. Upton is no Rick Ross 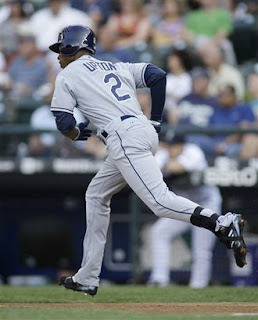 It's been a while since I dropped a hip-hop reference on this site, but today I found it necessary.

After a very highly publicized benching, Tampa Bay Rays center fielder B.J. Upton came out swinging Sunday against the Texas Rangers going 3-for-5 with a homer, a double and three RBI.

But lolly gagging on the base paths (again!) must have manager Joe Maddon up in arms.

The box score will show Upton was tagged out as he tried to stretch a single into a double, but sometimes you must go beyond the box score. Upton was tagged out by LA Angels first baseman Mark Teixeira before reaching second base. If you rewind the tape further, you'll notice that Upton doesn't hustle out of the box after making contact. If he hustles out of the box, he's standing at second...instead, he's embarrassed again on the base paths.

This is an epidemic in the big leagues and I don't like it. Whether it's Manny in L.A., the Fonz on the North Side or B.J. the Ray, it sickens me to not see multi-millionaires not run out a double. What maddens me even more is when B.J. or Sori don't do it...these are guys with the speed to steal 30+ bases, but they can't hustle to second base on what should be a stand up double.

Gentlemen, do like Rick Ross and get your hustle on!