TBDS Late Night Returns To Present: The Sky Is Falling Over Wrigleyville... 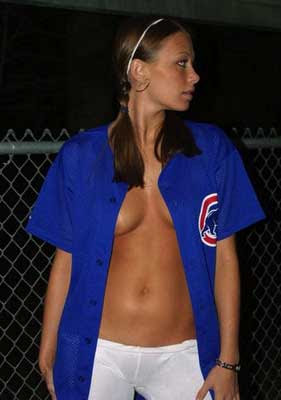 She'll make everything feel better, won't she? (via this site)
Call your friends. Call your neighbors. Call your parents. Call your sons and daughters, too. Heck, give them that child support check you've been meaning to give them for the last 18 years.

The Chicago Cubs are down 6-0 to the Colorado Rockies and are in danger of falling three (!) games behind the NL Central leading St. Louis Cardinals.

It's time to board up the house, stock up on canned goods and bottled water. Let's go hunker down in the basement until the coast is clear.

Cubs fans, allow me to be the voice of reason that is dying to escape your soul but instead gets intimidated by tales of goats, black cats and fans wearing headphones.

When September rolls around, 11 of the first 12 games the Cubs will play will be against the Astros, Mets, Pirates and Reds. Each of those teams ... you guessed it ... below the .500 mark.

In 2007, the Cubs were 8.5 games behind first place Milwaukee on June 23. They also had a season-long seven-game losing streak from May 27 to June 2.

Cubs fans, you act like you haven't seen your team with their backs against the wall. You also act like the 1927 Yankees are ahead of you. Contrary to popular belief, Albert Pujols is human. So is Matt Holliday. As is Adam Wainwright, Chris Carpenter and Adam Wainwright.

And it's not like Tony LaRussa hasn't ever made a mistake in his life. Ever.

Young scribe SalukiOrphan detailed five reasons why the Cardinals would win the NL Central. He made good points until:

The Cardinals have one of the most storied histories in Major League Baseball. They have 10 World Series Titles (would be 11 if not for Don Denkinger), most in National League history and second only to the New York Yankees, who have 26. The Cubs have a lot of history as well, unfortunately for them most of it goes against their favor. Chicago has been brought down with everything from goats to cats to guys named Bartman. The Cardinals also have 17 NL pennants and 10 division titles (seven NL Central, three NL East), while the cubs have 16 NL pennants (none since 1945) and five division titles (three NL Central, two NL East).

Not sure what the past has to do with the 2009 season. But if that is helping make decisions and projections around here, then by that logic, I like the Cubs' chances (19,870 wins in franchise history) more than I like the Cardinals' (19,464).

But it's not about that. See, that little nugget section is a little sample of hypocrisy.

See, the SalukiOrphan rails on the Cubs and their fans for using the team's past an excuse for its failures. Yet, conveniently, the Orphan uses it to show why the Cards will win the division. I guess I shouldn't expect anything more than lazy blogging from a Cardinals fan. That's the kind of lazy blogging that grinds my gears. Especially when it is coming from the same fan base that will lustily boo Manny "The Cheater" Ramirez, but then will give a slurping standing ovation to Rick Ankiel and Ryan Franklin.

My fellow Cubs fans, it's time to take a chill pill. Everything is gonna be OK. More tomorrow on Jay Mariotti, The List and another NFL Preview. Go to sleep now, kiddies. The sun will rise tomorrow.