Saluki Football Fever: Catch It If You Can

Saluki Football Fever (better known as Maroon Fever) is sweeping the nation.  OK, well, it's not sweeping the entire nation just yet.  But the defending MVFC champs have Saluki Nation buzzing.

SIU returns nine defensive starters, and in last night's scrimmage, looked to be dominant again.  As good as Jerry Kill's defenses were, the switch to the 3-4 package has added roster flexibility while getting the most out of the talented athletes current head coach Dale Lennon has at his disposal.

And while the offense gets no love, and people are fearing the loss of Larry Warner with every snap that goes by, I'd like to be the voice of reason that says "Hey, what about Deji Karim?"

Sure, he missed the entire 2008 season because of injury, but it shouldn't diminish the fact that he led the team in rushing touchdowns with eight scores in 2007.  The highly touted, very talented and often injured Richard White is hurt (again) as the season starts -- sidelined with a turf toe injury.  Last year, White was hurt in the Salukis' opening game against Hampton.

His injury opened the door for Larry Warner to scamper for more than 1,000 yards and become the most electrifying rusher I saw in my five years at SIU -- and that includes seeing Brandon Jacobs my freshman year.

Will this year's injury lead to the showcase of Deji Karim?

Alright enough of my observation, here are some quotes I gathered:

Deji Karim, senior, running back: (On being back on the playing field): "I can't even express the words. I'm really looking forward to getting out there and just playing the game again. This scrimmage felt like a game to me because I haven't been in a game in about a year-and-a-half."

(On facing the vaunted Saluki defense: "That is the best defense in the country, by far, to me. We go up against them everyday and it makes the offense better as a whole."

(On how the offense can match said defense): "Limit mistakes and everything will take care of itself."

Brandin Jordan, linebacker, senior: (On the ultimate goal, winning a national title): "Every time we start the season, we've got that in mind. This year is the best chance we've got at it in the years that I've been here."

(On how the defense looks compared to last year): "We're looking real good right now. Last year at this time everybody was running around like a chicken with their head cut off, basically. But this time around, it's all recall.

(On how he envisions his senior year): "We're going out with a bang."

(On trying to be the first Saluki road team to beat UNI in a very, very long time): "Hopefully we can change history and re-write history.

Dale Lennon, head coach:  "Last year we were very elementary with what we were doing, and now we have a lot of variations and combinations we can use to be effective."

"We're ahead of where we were last year. But what I told the team is, 'We don't have any wins yet. Last year they had nine wins. We've just got to take it one week at a time."

Overall, I had a good return to McAndrew Stadium.  It was nice to see a lot of the people I worked with at the Daily Egyptian, along with SIU administrators and such.  I'd try to name you all, but then I'd forget one and feel really bad about it.  But you know who you are ... and I appreciate your support. 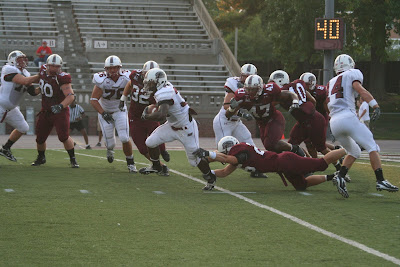