Here's One For Chris Lowery's Bulletin Board: SIU Ranked No. 117 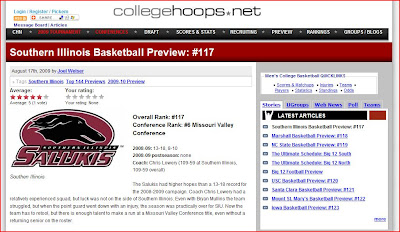 Not sure what to say here other than this preview couldn't be more off if it tried. It makes the NFL Previews at this blog look like they weren't written in jest and for fun.

Yes, I'll admit the Southern Illinois University men's basketball team isn't what it once was, especially when compared to the most recent Sweet Sixteen squad. Head coach Chris Lowery doesn't have a pair of seniors anchoring the backcourt, or two juniors up front that thrived when being fed by the little guys. Instead, Lowery has another young group of hungry kids looking to make their mark on Floorburn U.

I'll be brief with this because I do have a very premature and misguided post previewing the Saluki basketball season in the works. Instead, here is why this post should be balled up and shot like a basketball into your nearest trash bin.

If only you could do such a thing with the Internet:

If the Salukis could bring back the Tony Boyle that averaged 13.5 points and 7.0 rebounds in his last four games, I'm sure they would do so without asking twice.