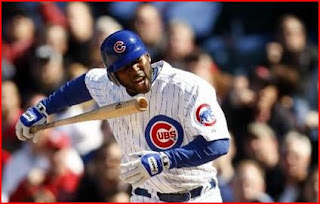 "What are you putting in my Haterade?"
I'm getting sick and tired of defending Milton Bradley.  I do it partially because I feel he has yet to get a fair shake from Cubs fans and the media.  And for probably the first time in this blog's history, I'm linking the media and the fans as Bradley's united front.

Fans belly-ached about the loss of Mark DeRosa so much, the Chicago media hopped on it and made the deal its own crusade in which to fight against Bradley.  Yet, until recently, no blame has gone to the guy who recruited and signed the outfielder to a three-year deal.

Then there's this in today's Tribune online edition, via Paul Sullivan:

Milton Bradley said after Tuesday's loss he's "never" comfortable playing at Wrigley Field.
"It's hard to be comfortable when you don't get a hit and get booed every time," he said. "When I go home and look in the mirror, I like what I see. My family is there I have people I can talk to who are very supportive, in spite of everything and all the adversity and the hatred you face on a daily basis. But I'll be alright. I always have."

Of course, Bradley's harshest critic, Steve Stone Dave Kaplan chimed in with his blog as well.

Milton, you don't face hatred. You face a fan base that is frustrated with your play this season and the fact that you were brought here to be a run producer and you have the grand total of  32 RBI's and are hitting just .259. Cubs fans want production and effort but when they see a guy who isn't producing he becomes a target of their frustrations.

That's what it has got to be like for Bradley.

Yes, Cubs fans, you have a right to voice your displeasure toward Crazy Uncle Milton for his .259 batting average, nine homers and 32 runs batted in.  But don't forget to channel some of that anger toward the guy who brought him here and mislabeled him in the first place.

Geez, from the looks of things, Jim Hendry has done nothing but mislabel his entire outfield.

Sounds like a fireable offense to me.  Go get 'em Tom Ricketts.