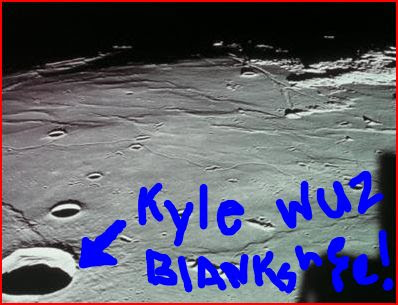 Last night's game-losing blast actually did land on the moon. Say, is that Albert Pujols' ball off Brad Lidge from the NLCS???
In a move that has "too little, too late" written all over it, Kevin Gregg has been exiled from the ninth inning and has been reassigned to blow games in the sixth, seventh or eighth innings rather than the ninth.

But for me, and most Cubs fans with half a brain, that's not enough. Gregg has got to go. For good. Yes, his contract expires at the end of the year, but at this point of the season, year end can't come soon enough.

In the meantime, here are 10 ways we can get Gregg gone from Chicago.

10. Implications of steroid use. Manny Ramirez caught a 50 game suspension earlier in the season, and one of those suspensions would serve the Cubs' bullpen well right now. If someone can throw a syringe or two in Gregg's locker, have a package marked 'HGH' sent to his home or inject him while under the cover of night, he'd be as good as gone.

It's too bad he doesn't take performance enhancers. After this season's performance, maybe he should.

9. Tie him to Mike Vick's dogfighting ring. As I said last night via Twitter, "Kevin Gregg is to Cub fans what Mike Vick was to dogs: Cruel & Inhumane." He's blown six saves, given up three game-winning home runs and leads NL relievers with 12 home runs allowed -- which is two more than he's allowed in the last two seasons.

If someone can link between Gregg's cruel and unreasonable treatment of Cubs fans with Bad Newz Kennels, Roger Goodell would bitch-slap Bud Selig and suspend Gregg himself.

8. One night with Dirty 30. Here's the plan: 1. Hit Gregg with frying pan, make sure he is knocked out. 2. Put blonde wig and eye-liner on passed out Gregg. 3. Send him to a New York area bar with Dirty 30. Watch the sparks fly. Opposing hitters might only be hitting .229 this year against Gregg, but everyone knows Dirty 30 is always batting 1.000!

7. One night as R. Kelly's wing man. Yeah, Kellz beat his case, but someone who sings the lyric, "Shorty if you're thirsty, I got the good, good lemonade" in a song is disturbed. If Kellz can get Gregg on a remix (not sure why, but hang with me here), it won't be long until a blurry video surfaces alleging Kevin Gregg of giving and 14-year-old girl some of his lemonade.

6. One night with Donte Stallworth. Seriously, how does a man who gets behind the wheel of a car drunk, kill a man and only get 24 days in jail. Yet, Mike Vick, who ponies up some money for a dogfighting ring gets thrown to the wolves. This is what's wrong with the American punishment system. There is no way I can justify giving money for a dog-fighting ring as a worse offense than killing an innocent bystander while driving drunk.

5. A Plaxification. Picture this: Kevin Gregg goes to the club wearing sweatpants and accidentally shoots himself with the thing that was supposed to protect him.

4. Take him on the Maury show. Kevin Gregg has screwed the Cubs and their fans all year. So, who's to say he hasn't done the same with some hoochies looking to get a few dozen free paternity tests because they don't know which of these 27 guys is her baby's daddy.

A few trips to the Maury Show in New York should tie up some of his time.

3. Use a time travel device (part one). Go back in time. Bring the crazy Lou Piniella into 2009. Let him attack Kevin Gregg like he attacked Rob Dibble. Make sure all evidence points to Aaron Miles. Ensure Miles gets charged for murder.

It's too bad we know Aaron Miles' defense attorneys will bring up the very valid point that Miles can't hit anything.

2. Use a time travel device (part two). Warn Jim Hendry of a future of Kevin Gregg allowing game-losing gopher balls. And with each run Gregg allows that season, tell Hendry that 1,000 donut shops are closed in each city baseball is played in.

Then, there's no way Hendry makes this trade.

1. Use a time travel device (part three). One word: Abortion.