How Cameron Crazy Is Dookie V? Enough To Pick Duke No. 5 In Preseason Top 40 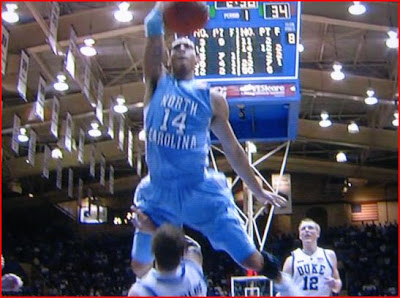 Duke fans, get ready to see a lot more of this from the next generation of North Carolina stars.
I asked myself a simple question before writing this blog: Isn't it too early for Duke-bashing season?

My answer: It's never too early for Duke-bashing season. Especially when Dick Vitale is putting out a Preseason Top 40 in early-to-mid August. And when said preseason poll puts Duke at No. 5, it's time to ask the really hard questions in life.

Like, how much of Len Bias' blow did Vitale abuse before penning this piece. And after you read this, I'm sure you'll wonder the same thing about me.

(Hint: None, that stuff's expensive and out of my league. I only do classy "drugs" like Old Style.)

OK, I'm done with the jokes (for now). Here is what Vitale had to say:

5. Duke: Gerald Henderson is gone, but Coach K has the dynamic duo of Kyle Singler and Jon Scheyer back. The Blue Devils will also miss Elliot Williams, who transferred to Memphis.

Kyle Singler is a very nice player who should garner some preseason All-America votes, but he's not dominant in any particular area of his game. He gets exploited off the dribble by quicker guys and posterized by bigger, stronger guys. Jon Scheyer is a poor man's J.J. Redick. Defending Scheyer is as easy as putting anyone on your roster with a little bit of length and an ounce of athletic ability. If that gets done, Scheyer disappears quicker than that cute blonde at the bar that you promised to show off your Pokemon card collection to.

The only thing more insulting than Duke at No. 5 is that North Carolina is ranked behind them.

While the defending National Champions (that never gets old) will be without Tyler Hansbrough, Ty Lawson, Wayne Ellington and Danny Green (pictured above with his balls on Greg Paulus' forehead), head coach Roy Williams has done what Coach K hasn't been able to do since Uncle Roy moved in down the street.

Ed Davis (a projected NBA Lottery pick) joins Deon Thompson (6-foot-8) and Tyler Zeller (7-foot) in what could be the deepest frontcourt in college hoops. Throw in one of the nation's best defenders, a healthy Marcus Ginyard and the No. 5 recruiting class in the nation (Duke ranks 16th) and you have a team that should still make a serious run at an Elite 8, if not another national title.

Meanwhile, the Blue Devils return Nolan Smith, Lance Thomas and Brian Zoubek. That might strike the fear of God into a high school team. Maybe.

Besides, SIU's Nick Evans made Zoubek his bitch at Madison Square Garden. I expect the rest of the ACC to do the same.