Eleven Things Destined To Occur Before I Would Become A St. Louis Cardinals Fan 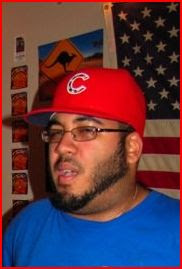 Getting texts at 1 a.m. is usually a sign of good news (Wink, wink) but not when it comes in the form of someone changing their baseball alliances in the wee hours of the morning after an 11-5 loss.

And despite a recent skid against Colorado, this Cubs fan is not done driving the big blue bandwagon. In fact, here are 11 things that would likely happen before I even considered going to "the dark side."

P.S. The closest you will ever get is me sporting that patriotic Cubs hat that happens to be red.

1. Dr. Dre drops 'Detox.' Dr. Dre's third and final album has been in the offing for about five years now. It's been on the rumor mill longer than Lindsay Lohan, Britney Spears and Paris Hilton combined. Yet, still no album from Andre Young.

There is no doubt in my mind that Detox will be released well before I don a Cardinals jersey.

2. Jay-Z uses the autotune on BluePrint 3 album. In keeping with the music theme, after announcing autotune dead on arrival, the God Emcee takes a turn as the God Autotuner as a hidden track found only on albums sold in Russia will emerge.

The track will feature guest spots from Nas, Ice Cube and other artists you would never (and should never) expect to use the voice-altering device.

3. Miley Cyrus turns 18. She can dance on that provocatively placed stripper pole all she wants, I'm not touching that until Nov. 23, 2010 ever.

4. America elects a black president (again). Two-hundred and thirty-two years came and went before a black president was elected. If that happens again, an artist known as Infant Jeezy will likely pen a remix for "My President."

And still, I will not have become a fan of team whose logo is two birds on a bat.

5. Michael Jordan comes out of retirement (for the third time). His Airness will use his Hall of Fame speech as a platform to announce his third un-retirement. This time, Jordan will come back as a member of the Seattle SuperSonics.

What? No strike through? Read on.

6. Seattle gets a basketball team (again). Oklahoma City took what was rightfully theirs, but once again, the Seattle SuperSonics will ride again, thanks in part to The G.O.A.T. No longer will this generation wonder, "What the heck is Ice Cube talking about when he says the Lakers beat the SuperSonics?"

Jordan will revive them scoring 18 points per game, but will trade Kevin Durant, citing the fact that he is a ball-hog in an interview with the Seattle Post-Intelligencer. ...

7. The Post-Intelligencer (and Rocky Mountain News) ride again. I'm sick of newspapers dying, and since Jay Mariotti (rumored to be) returning to what he coined as a dying medium, the comebacks of the P-I and RMN spark a revival in the print news era.

8. Charlie Weis beats Mark Mangino on The Biggest Loser. The tubby Notre Dame coach would celebrate said victory by attempting to eat Baby Mangino. The attempt would fail as miserably and comedically as the Fighting Irish's upcoming attempt at a winning football season.

9. Jessica Alba, Jessica Biel and Jessica Simpson have a no-holds barred battle for my love. The event will take place in a pool of Jell-O in my back yard. And in true wrestling form, Eva Mendes, Scarlett Johansson, Gabrielle Union and other past dream girls will try to intervene in the fight for my love and affection. Proceeds from the event will go toward the "Make It Rain Foundation" which helps college-age young women put themselves through college.

10. Mike Vick faces off against Brett Favre in the Super Bowl. Vick leads the Miami Dolphins in the Wildcat formation while Favre leads the Green Bay Packers, only after Aaron Rodgers "mysteriously" disappears hours before kick-off.

11. Tony LaRussa hires me to be his designated driver. What? You thought I'd make it through a post with a TLR DUI joke? You must not know this blog too well.