Pigskin Pimpin' On A Sunday

Ohhhh snap it's another edition of your favorite snarky and sarcastic football segment.  Catch it if you can ... after the jump.


Get your Kurt Cobain vigils ready, Da Bears are traveling to Seattle.

Dave Krieg's Strike Beard has attempted to rally the troops in an effort to make the Bears' time in Seattle a traumatic experience.  It's Seattle.  Consider that feat already accomplished.

T.J. Houshmybabydaddy came off as a bitter, jilted ex-lover earlier in the week as he threatened that Jerry Angelo would rue the day he refused to sign.  While talented, it seems as if the Bears GM has taken a cue from his Chicago baseball counterparts by not paying top money for a second-rate talent.  Upon hearing TJH's comments, the Bears secondary turned the other cheek -- and if they play well enough on Sunday, The Housh might be planting a pair of lips on said cheek.


As for the gameday festivities, Da Bears are coming off a feat the Seahawks and their fandom would be jealous of --  and that's beat the defending Super Bowl champion Pittsburgh Steelers.  They did so by  stumping the run without Brian Urlacher and providing that classic bend-don't-break pass defense in the guts of the game against Ben Roethlishotdogpolishberger, but they did the job at its most crucial moments.  Thankfully, the Bears won't have to deal with Big Ben or Matt Hasselbeck.  Seneca Wallace provides his own set of issues, primarily, what the heck kind of name is Seneca?

Contrary to my original opinion, today might not be a Jay Cutler kind of day.  Did you see what Frank Gore did to the Seahawks last week? Next week at this time, we'll be able to replace Gore's name with Matt Forte.

If the Bears lose, it might be due to colorblindness as the Seahawks will apparently debut a set of uniforms that even the Oregon Ducks football team thinks is a bit of an eyesore. 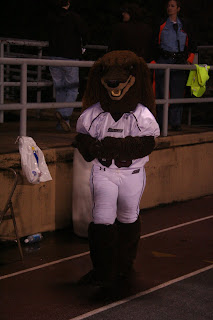 Revenge is a dish best served with a side of Bison.  It was my first thought after the SIU football team was able to hold off North Dakota State 24-14 on Saturday at McAndrew Stadium.

It was a game in which the Saluki defense did a bulk of the heavy lifting.  Kyle Walker came away with three quarterback sacks, fellow linebacker Brandin Jordan collected 10 tackles and safety Marty Rodgers picked off a fourth quarter pass that would eventually spell the beginning of the end for a Bison offense that came into the game averaging 40 points per game.

Quarterback Chris Dieker rallied from a slow start to throw a pair of touchdown passes, including a 61-yard strike to Jeff Evans.  Dieker's struggles can be a cause of concern for a Saluki squad that has their eyes set squarely on a national championship.  But it seems as if Dieker is always doing just enough to put up Ws week-in and week-out.

SIU will travel to Western Illinois for its next Missouri Valley Football Conference showdown.  The Salukis will be going up against a familiar foe that will have a few new wrinkles.  Southern should eb expecting the unexpected as the Leathernecks will likely try to rally around their coach Don Patterson, who recently resigned as he is fighting health concerns.

TIM TEBOW GOT KNOCKED THE F*** OUT


Tebow's been released from the hospital.  You can resume your lives.  And now, meet your heir apparent to the Tebow Dynasty ... John Brantley?

These fans don't seem to thrilled. 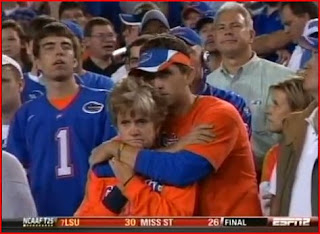 After two weeks, everyone in my fantasy league owns a 1-1 record.  For the second straight week, Trent Edwards -- a late round draftee for yours truly -- gets the start over one of my top picks Jay Cutler.  I'm not feeling the Cutler-Seattle match-up and feel that Matt Forte is going to have a monster game against the Seahawks.

Unfortunately, TBDS' own Johnny Sole has Forte going for him.

Yahoo!'s exit polls project me to narrowly fall to the Soleman.  Do I have a shot with what I've got to pull of a minor upset? 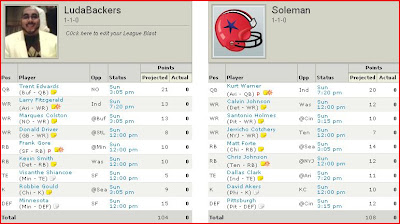