Drew Barham Bails On SIU, Will Be Walkin' (On?) In Memphis 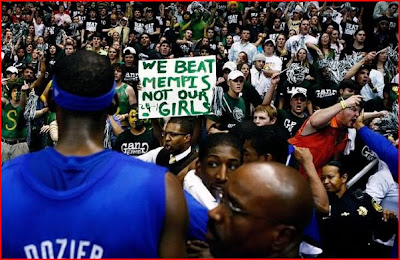 To me, Memphis is known for BBQ and broken windows. (photo via)
The Drew Barham saga is over.  Actually, it's kind of been over for a while.  We've just been waiting to see the closing credits.

Who is Drew Barham?

Barham was a signee for the Southern Illinois University men's basketball team, expected to lace 'em up and take the court for the Salukis during the 2009-10 season.  The 6-foot-7 guard was expected to be an outside sniper for the Dawgs -- something Chris Lowery and his gang could have desperately used as a weapon.

The Tennessee native was supposed to be on the SIUC campus this fall.
Instead, Barham has enrolled with the Memphis Tigers.  According to what his pops says in this report, he has asked for his release, but has yet to receive it.

So where has this story been all summer?  Sitting in my back pocket of course.  Actually, it's been on the back burner for anyone who covered the Saluki men's hoops squad this season.

My link to the story?  Funny you should ask.

It really started in April after John Calipari left for Kentucky, taking everything out of Memphis with him, save for O.J. Mayo and Beale Street.  (I'm sure Grizzlies fans kind of wish they would have taken that dreadful franchise with him as well, I digress.)  I have a source in Memphis with basketball ties who told me that the Tigers had been making pitches to local talent to play at Memphis.

Kind of sounds like the kid looking for a date after his drop-dead gorgeous girlfriend realized she could do so much better.

Anyway, Barham took the bait.  Then did the switch.

Personally, I say good riddance and I'm sure (despite the kid's talent) SIU feels the same way.

SIU has made a killing recruiting kids that wanted to play in Carbondale.  And for the longest time, Barham wanted (and looked forward to playing) for SIU, but when a situation opened up close to home, he took it.  As someone who is 6 hours from home, I know what the kid is going through. I still don't necessarily excuse him for signing a the letter of intent, then backing out after the prime recruiting season is complete.

Still, have fun in Memphis, Mr. Barham.  The girls are cute.  Beale Street barbecue is the absolute best.  And like the Grizzlies, now that the talent is gone, you'll be playing in a half-empty NBA arena as well.

And beware of parking lots, as this blogger has a lot of experience in Memphis with busted windows in parking lots near the FedEx Forum.  Lock your doors, remove all visible change from your cupholder and for heaven's sake do not trash talk any Oklahoma University fans if you happen to be wearing North Carolina gear.

Drew went to my school and they said he will get playing time at Memphis.