FAILblog Of The Day: Who Is Derrick Lee? 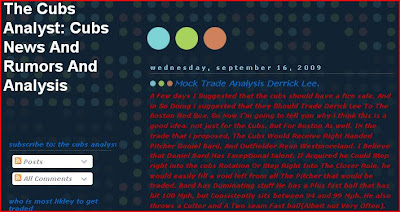 The Cubs have won back-to-back games and Milton Bradley is out of the picture.  Screw it, let's hold a fire sale.  Fumigate the whole thing.  Back up the truck.  Blow it up.  Scorch the earth and start a-new.

Let's start it by trading a guy who does not exist.  Or maybe he does and this is part of a grand plan to trade a guy named Derrick Lee to the Red Sox for arguably their most prized pitching prospect.  Maybe Theo Epstein will think, "Wow, we're getting Derrek Lee, who's one helluva first baseman" when they're really getting Derrick Lee, a Chicagoland plumber.  Better idea, let's trade Carlos Zambrano to the Rangers for not one, not two, not three but four(!) failed prospects.  That's a wonderful idea.

Oh, and while we're at it, let's do it with shoddy spelling, grammar, punctuation and more run-on sentences than a novella by a third grader.

Congrats, kid.  You'll probably be getting a job analyzing the Cubs before I do.  You can't be worse than Dave Kaplan, right?

You should check out the comments in some of the threads on this site: www.firedustybaker2.wordpress.com. This might be the collection of the dumbest Cub fans that don't read BCB.