Cubs, Cards Deserve Better Than This 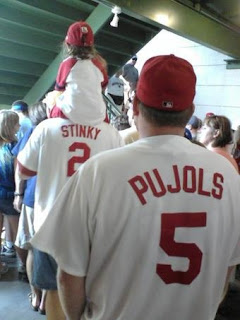 You couldn't have scripted it any better if you tried.  The St. Louis Cardinals and Chicago Cubs entering a mid-September weekend set in St. Louis sitting first and second respectively in the National League Central.

Simply stated: the Cubs have been exposed as frauds.  No wonder the Yankees-Red Sox series continues to get whored out by network executives.  The Cubs will send Ted Lilly, Ryan Dempster and Carlos Zambrano to the bump while the Cardinals counter with John Smoltz, Chris Carpenter and Adam Wainwright.  On paper, it's must-see-baseball-TV.

Instead, I can almost guarantee the following stories will be written:

That is all this series will come down to.  Salvaging a series win would make the Cubs 7-9 against the Cardinals, marking the first time the baby bears have lost a season set to the birds on the bat since the Dusty Baker Era.  A series sweep by the Cubs would tie the series at 8-8.  And ties are like kissing your sister.  At least, that's what I've been told.  I'm an only child, so I have no idea what that whole deal is about.