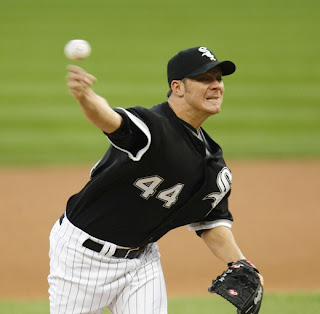 Had it not been for a text message that inspired this blog post's title, I would have forgotten Jake Peavy ever existed.  He had been out since June 8, and at that time he was with the San Diego Padres.  I had dropped him from my fantasy league a week ago, citing his prolonged absence from the rotation and the fact that the White Sox are the only team falling faster than the Cubs.

But finally, Peavy made his debut Saturday night and picked up the win throwing 73 pitches, striking out five and walking two in the South Sider's 13-3 victory against the Kansas City Royals.

A healthy Peavy fortifies a strong starting rotation at 35th & Shields as he would join Mark Buehrle, John Danks and Gavin Floyd.  It's a fearsome foursome very few rotations in baseball could match on a game-by-game basis.  And despite the team's 13-3 rout of the Royals, the team's offensive woes should still be Kenny Williams' top priority.

Catcher A.J. Pierzynski is the only player from the team's opening day roster to have a batting average over .300.  Carlos Quentin has struggled to find his stroke in one injury plagued season after tearing up the American League in his first go-around.  Jermaine Dye and Paul Konerko are aging again, and Scott Podsednik is being squeezed out of the line-up by the presence of Alex Rios and his .159/.173/.224/.397 line.

The Sox could have a productive double-play duo if they dare move Gordon Beckham to his natural shortstop position and shift Alexei Ramirez back to second base, where he would be less of a defensive liability.  That would create a gaping hole at third base, and if Williams really wants to stick it to Cubs fans, he would sign Mark DeRosa to fill that void.

Then there's the bullpen, where Bobby Jenks has turned in his best Kevin Gregg impersonation to the tune of six blown saves.

Chicago's baseball teams have a lot of work to do in order to return to 2008 form.  And if Peavy can stay off the trainer's table, it would look as if the White Sox have a bit of a head start.