Salukis Should Be Primed For Payback 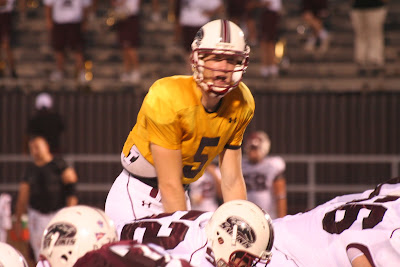 Chris Dieker holds the keys to the Saluki offense.


Can anyone get a hold of Larry Warner before Saturday's game between the Southern Illinois Salukis and North Dakota State Bison?

SIU opened up a 20-0 lead in the Fargo Dome, but NDSU rallied to pick up a 35-27 win over the Salukis*.  It would be the only conference loss the Maroon & White would suffer in Dale Lennon's first season.

A lengthy winning streak began the next week against Indiana State and the good times rolled until SIU fell to New Hampshire in the playoffs.  So, what keyed the Salukis run to success?

A speech by Larry Warner.

In an interview during Indiana State game week, Lennon mentioned that the team's star running back had addressed the team after the loss in the locker room ... but would not expand on what he said.  I later approached Warner and asked him what he told his teammates and received the generic football speak of playing harder, increasing focus and flawless execution.

Warner was the most outspoken Saluki.  And at the tender of 22, I had seen enough press conferences and conducted enough interviews to know that Warner wouldn't tell me exactly what he said.  But the fact that he said something was enough.  SIU would go on to outscore its opponents 235-104 in the team's ensuing 7-game winning streak.

In those games, Larry Lightning accumulated 879 rushing yards and 7 rushing touchdowns.  It was clear that he was the heart and soul of the offense in the locker room and on the field.  And it is even clearer that his teammates responded to whatever he said that Saturday afternoon after what could have been a soul-crushing loss.

Hell, he still won't tell me and I've asked him about it every time I've seen him on a football field since.  I guess some things are better left unsaid.

For the 2009 Salukis to avenge last season's lone conference loss the following needs to happen.
Burying a lead of my own, the biggest key might come after halftime.  For whatever reason, SIU comes out flat in the third quarter.  Lennon couldn't explain it last year.  Neither could the players.  After the team's 31-28 loss at Marshall, your favorite sports writer's favorite sports writer/blogger noted that his beloved alma mater allowed 21 points to the Thundering Herd in the third quarter.

* If siuDE.com worked properly, I would have linked to the stories myself and BFeldt wrote.  Um, someone might wanna get on that...