Maybe We Should Just Call Them The FAILsox 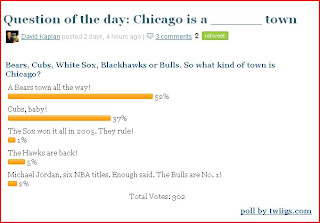 I think I might have to check in with a counselor if I find myself agreeing with one more Phil Rogers column.  But only after Crazy Uncle Milton agrees to get himself some help first.

Rogers conveniently points out that Kenny Williams made some offseason deals that look questionable now.  And while Williams' cross-town counterpart gets railroaded on a daily basis, Williams skates away untouched.

This poll on Dave Kaplan's blog (screen grab taken Thursday) is only the tip of the iceberg.  How telling is it about a fan base that can claim the most recent major championship getting out-voted by a team that hasn't won a title since 1998 and a franchise that just became relevant over the last year in a half?

Chicago is a Bears town.  There isn't a doubt in my mind.  It's the only franchise in this city everyone in the area can wrap their arms around.  The White Sox had their chance, but passed on the opportunity because they found it to be easier to just take shots at North Siders rather than using the ultimate prize to build up its fandom.

The problem with a healthy chunk of White Sox fans is that they treat the Cubs like the jilted lover they claim to not care about, but secretly stalk via social networking sites just to keep tabs.

Speaking of which, I've seen more Facebook status updates, tweets, texts and other sorts of messages about the Cubs' failures from White Sox fans than I have from Cubs fans.  True story.  They'll say "hey, it's a rivalry thing" despite the fact that the only rivalry happens to be an inter-city ordeal that only counts six games in the standings per year.  At this stage of the game, White Sox fans are acting like the anti-establishment high schooler who acts a-fool only because one of his popular buddies is the lunatic that happens to lead the asylum.

The lunatic that leads this asylum is clearly Steve Stone.  Via his (protected) Twitter, Stone has ridden Jim Hendry's moves harder than a Brokeback Mountain joke.  Yet, it must be as if he is wearing Hawk Harrelson's eye patch because all he'd have to do is look outside of his own announcing booth and see that Williams has made similar moves.

Where are the outraged tweets about losing a starting pitcher who is 14-9 with a 2.91 earned run average in Atlanta?  Or the ones about an outfielder with 27 homers and 79 ribbies?  I'm not sure, but I'm still waiting for the Stone Pony to speak his "truth" via a Twitter update any minute now.

When the deal first happened, M.J. Hartwig noted that the White Sox sold Swisher too soon.  Finding room for Dirty 30 would have been difficult, but because of his versatility, he could have been used all over the field, which would have benefited the team over the course of a 162 game season.  He's seen his homers, ribbies and OPS skyrocket since joining the Yanks and a good chunk of that has to do with hitting in a ballpark that rivals the size of a little league field.  But with Jermaine Dye and Jim Thome off the books starting in 2010, one would have to think the White Sox could have used Swisher somewhere in the order.

As for Vazquez, he was the White Sox's version of Jason Marquis.  Good, not great, but always reliable.  Little Game Javy has thrown at least 200 innings in nine of his last 10 years.  The one year in which he didn't reach the 200-inning plateau was in 2004 where he threw 198 innings.  Vazquez has been a strikeout artist, reaching 200 punch outs in five different years, including each of the past three seasons.  Has his game hit another level because he plays in the National League?  Certainly.  But it's not like the White Sox are going up against the 1975 Reds, 1927 Yankees or one of those vintage Colorado Rockies teams for a division crown.  It's the American League Central, where the Royals and Indians battle it out for gagging rights.

Like it or not, Vazquez could have been an integral part of a winner.  Proof of it is the fact that he has thrived under baseball's best manager Tony La Russa Bobby Cox.

Just for fun, imagine this starting rotation in 2010:
OK, the dream sequence is now over.  It is very likely that Tyler Flowers pans out to be a productive catcher.  And pitchers Jhonny Nunez and Jeff Marquez could turn out to be fine ball players down the line as well.  But Williams made the same mistakes Hendry did.

By subtracting valuable pieces from the team's 2008 division championship run, Williams failed to add pieces for 2009.

I know the classic response to this blog will be something to the extent of "blah, blah, blah, 2005, blah, blah, cubs suck, blah" -- but judging by this poll -- the only people that cared about the 2005 White Sox happened to be the handful of die-hards that have been rollin' with the South Siders since it was called Comiskey Park.