Terrell Owens Wants To Get BALCO'd Up With Rodney Harrison's Help 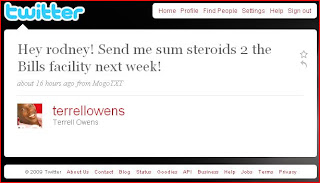 And you thought Milton Bradley was a distraction.  Not too long after not catching a damn ball, and catching flak because of it, Terrell Owens went to the Twittersphere and launched an onslaught against analyst Rodney Harrison.

The most humorous, in my humble opinion, is the one above.  If anything, though, the next two carry the most punch.

In baseball, it seems as if there is no worse crime than getting supplemental help from steroids.  In football, it's clearly a joke.  If a baseball player were to do this, there would be an full-blown investigation on everything and anything that goes through and into said player's system.
And another thing -- baseball people consider steroid usage as cheating the game.  A lot of football folks feel that T.O. cheats teh game with the way he has treated his teammates (see: Quarterbacks) in his time in the NFL.
So, which is more punishable in the fan's court?