Pigskin Pimpin' On A Saturday 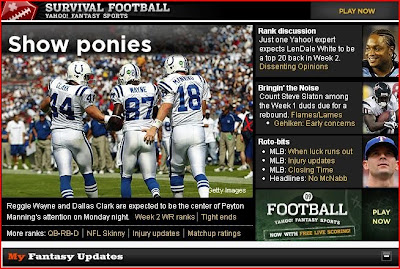 I'm sure Peyton Manning's fantasy updates include Reggie Wayne.  Poor Dallas Clark probably feels a little out of the mix.  After the jump, stuff about football.

Florida is about to pound the living snot out of Tennessee, so much so that Vols fans will be already looking forward to college basketball season.  On second thought, maybe not.  For all his flaws, at least Lane Kiffin has brought the Tennessee football program out of the druthers that Bud Kilmer Phil Fulmer had put it in.  Never have I seen a game that was so certain to be a blowout reach such levels of hype.

Any guesses when Florida coach Urban Meyer will call off the dogs?  My prediction is somewhere around the year 2012.  Unless, of course, he's at Notre Dame.

The other big game of the weekend is Texas Tech visiting Texas in Austin.  The Longhorns will have revenge on their mind as they will likely try to run it up on the Running Rebels, who helped knock them out of national title contention last year.

It shouldn't be a difficult task if you take into consideration that Graham Harrell and Michael Crabtree no longer reside on campus.  Sure, Mike Leach is an offensive wizard, but every coach will tell you that you don't win games without talent, no matter how good of a coach you are.

Texas takes center stage again on Sunday night when the Cowboys host the Giants in the regular season debut of the 'Boys' new stadium.  This game looks a lot different than it would on Madden 2009, that's for sure.

Having met Jacobs personally, he's a nice guy.  So I'll go with the Giants to spoil the party -- then party with the cheerleaders afterward. 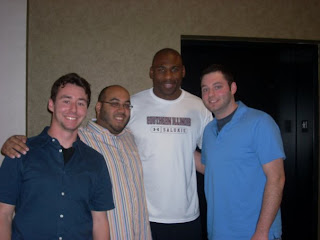 Oh yeah, then there's the Bears' home opener.  Quarterback Jay Cutler desperately needs to do two things.  A) Erase last week's game from his memory -- at least the parts where he threw four INTs.  B) Figure out how to beat the 3-4 defense.  He struggled last year against the Chargers, who use that system.  He struggled mightily against the Packers, who just started using that system and have made Dom Capers look like a genius again.  Now he goes against a team that has perfected the defense and has the NFL's reigning Defensive Player of the Year.

If only Dick LeBeau could turn his defensive prowess into a head coaching job.  Oh right, he did.

Here's hoping Cutler avoids a scene like this tomorrow.

psssssssh way to pick the pic with Jacobs that i'm not in! fail.